I really enjoyed my two weeks home alone. With the floor held up by pending decisions, it was prime time to enjoy the sunshine and the garden. Omar and I continued our good landscaping work with a bench and another stone wall for a raised bed. The brick bench took a bit of work to get right but it’s turned out looking cool, plus it was a great way to use up some of the broken bricks. I bought a cherry tree and planted that next to my bench for pink blossoms and tasty cherries.

Then Omar and I did a bit of pointing on the house and had a go at removing the smallest of the old floor beams. It was quite a task taking the beam out since we couldn’t lift it between us, but we took our time and made a good job of it with some ropes and leverage.

I also spent some evenings making the rental house more homely with some house plants and home made decorations. It was lovely to spend the long evenings doing something creative and the rental place is feeling much nicer to hang out in now.

Dave got back in mid January and we had a volunteer Chris arrive too. All together that made four pairs of hands, so we took the opportunity to get to work getting the last two beams out of the old floor. We drilled the concrete out of the walls and then it was a case of trying to make as much space as possible around the end of each beam in an effort to get it out whilst cutting as little as possible off an end. It went quite well and we should be able to reuse two of the beams for the mezzanine level if we decide to do that.

Drilling out the concrete

The final beam was so heavy that the four of us could barely lift it between us. It had just started to rain as we took it out the window and the slippery paths meant that we had to abandon it at the closest available place next to the house. It carried on raining for four days straight. After all that gorgeous winter sun I suppose some proper winter was about due. We still went to work on the house, but had to do shorter stints because it’s cold working up there. In between, we chatted to Chris about our plans, got some good ideas and advice and did lots of cooking, eating, reading, planning and decision making. 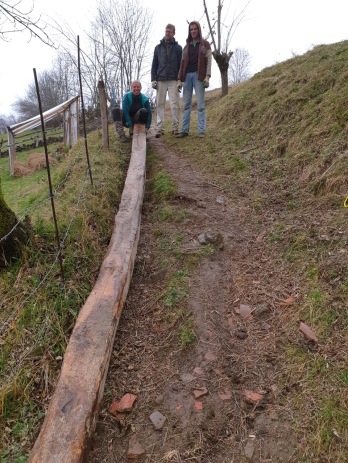 Making a decision about how to rebuild the floor has been painstaking. We’ve ended up coming full circle and are going to rebuild in the same style as the old floor, except that it will be level and bounce-free. Steel I-beams are going in where the wood beams came out, then glulam joists are going to run between them. It’s cheaper to use some steel and then thinner wood joists than to use wood that is thick enough to span the whole floor.

With the new plan in mind, we spent our time at the house working on the inside walls. Where the wood beams were removed, we extended the holes to make sure the new beams will sit at the right height. Then we measured the gap and put in our order for the steel beams.

We finished pointing the inside walls down to the level that the new floor will be. It only took a few days with the four of us doing it. And all the while it just kept raining. The inside of the house was soaked from the seeping water, drainage channels were spilling over and the paths became rivers. But we made good progress in spite of the weather. And then, having helped us get the beams out and finish the pointing, Chris headed off to another project further east.

Wet walk in the woods

With the new beams on the way, we asked around for some help getting them in across the field. In spite of the fact that it was muddy, heavy work, we managed to get some cheery volunteers! And luckily the skies cleared slightly so we didn’t have to work in the rain.

Jorge, Omar and Nik came along to lend their hands and the five of us got started on the first beam. At 200kg it was hard work getting it off the ground, never mind shuffling across the wet, uneven field with it. We carried it across the first field (with two or three breaks) since that belongs to someone else and we didn’t want to tear up the grass. When we crossed the boundary into our field, it was a relief to put it down and drag it with ropes the rest of the way – so much easier!

Thankfully, after the first one, some more volunteer hands arrived in the form of Marina and Rodrigo. Marina was carrying their baby, so she was designated photographer, but with the extra help from Rodrigo it was noticeably easier carrying the next one. All in, it only took two hours to carry all three to the house. It all went very safely and smoothly, the only disaster being Jorge losing his shoes in the mud!

Once the beams were hosed down and stored in the house, we headed down to the rental place for coffee, cake and a chat before everyone headed home. I was absolutely knackered by the end of it but we’re pleased with how it went and it feels good to be part of a community that helps each other out. 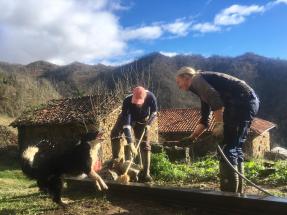 Hosing down the beam with excited Collie 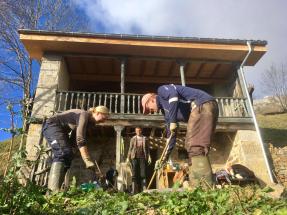 The next day Dave and I were feeling tired and sore but it was the last sunny day forecast for a while, so we headed up to start work on the beams. We had to brush off the mud, then scrub them clean of rust before applying the primer. Even though there were three of us working, it still took four hours to do all the sanding. At sunset we cleaned them with solvent and as the night drew in we got to painting them with primer. The primer finally ran out at 8pm with just one side of one beam left to paint and we tidied up and walked back across the field under the stars.

On Sunday the rain came back and we had a much needed day off with the exception of a quick trip to animal ER for Charlie. She had to get some bite wounds stapled together after a spat with another dog from the village. There’s always something to do!

The last few days have been spent doing more painting. Two coats of grey primer have been put on and Dave and I managed to find a paint we both like and we have started painting them. It will be a few more days before they’re ready to go in their final positions.

Primed and ready for paint

So there we are. Things are still going slowly but I feel like we’re getting into a better rhythm with the building work. We are better at discussing options and making decisions and have accepted the slow pace so we get less frustrated. And the further along we get, the more motivated we are. We can actually see that the house is starting to come together now (although we might be the only ones!) and that is spurring us on. I’ve got a good feeling about the rest of 2019.

One thought on “New floor beams”