It’s a hot afternoon and I’m sitting in the hammock under the dappled shade of an ash tree contemplating my new life here. The breeze is keeping me cool and from the hammock I am overlooking the roof of our house, part of our field and the view of the tree-covered hills beyond. There are birds singing, bees buzzing, crickets chirping, a far away cockerel crowing, and in the distance I can hear cowbells and the occasional dog barking in the village below. Our field has turned into a beautiful meadow since the cows departed for higher pastures. The grasses are waving in the breeze and the wildflowers are blooming in the sun. The grass won’t get cut for hay until the end of July, and after that the cows will be back.

Dave is away at the moment on a natural building course in Portugal. My sister Faye and her boyfriend Iain were here visiting for five days, and yesterday evening I dropped them off at the airport. Whilst they were here, we had some nice holiday time walking along the river, having lunches in the sun and chatting over beers, but they also got to work building a fence to keep the cows out of what will be the pumpkin patch. It’s looking wonderful and went up a lot faster with extra pairs of hands! I spent this morning finishing off the fence and starting to scythe the part of the field I want to plant.

Before that, Dave’s parents were here to visit. They had less luck with the weather but we enjoyed several little jaunts including a trip around a big cave in the next valley. It contains one of the largest bat populations in Spain! You can’t go in the bit where the bats live, but we had a great tour of the other parts of the cave.

The veg garden is growing up nicely. It looks like we’re about to have quite a lot of peas to eat, which will be just great! And all my summer crops are starting to get going now. I’ve planted out my runner beans by their poles. I’ve got lots of seedlings coming up of parsnip, broccoli, cauliflower, pumpkin, French bean, kohl rabi, white beetroot, sweetcorn and sunflower. The tomato and pepper plants that I’ve been growing in small pots are all going to need somewhere to go, but I’m still deciding where that will be! There always seems to be a lot to do. I counted the other day that I have to make space for about 50 pumpkin plants, despite already having 25 out in the garden. If they all grew up to give us an average of 2.5 pumpkins each, that would be 188 pumpkins. That may be a few too many… we shall see.

We chatted to him about the work we wanted to do whilst he was here. When I said that I was keen to have the re-pointing done in the old style, using a clay-soil mix for mortar, he said “But that’s how they did things before. Now we have cement and it’s better.” I’m sure cement is stronger, but the point of the mortar is to allow the wall to breathe as well as support the stones and make it weather proof. We still haven’t decided what to do, but I think we’re both pretty strongly against using cement in our build. Cement is energy-intensive to produce, releasing a lot of CO2 in the process. I know we’re only doing a small project so you might think our contribution won’t make a difference, but imagine everyone realised that they could make a difference by doing their little projects in a more sustainable way.

Now we just have to choose roof insulation, order the materials and get on with it! Don’t hold your breath.

Even though progress might seem glacial, I don’t feel any stress or pressure about this project. It would be nice to have a roof, walls, windows, door and a wood stove before winter, but other than that we can do the internal parts later on even if the weather isn’t great.

At the moment, I’m enjoying our first summer here and regularly reflecting on how happy and lucky I feel to be here. This place is fantastic, our neighbours are wonderful and I spend my time outdoors doing what I love.

And just in case things weren’t perfect enough, Tarje and Signe’s dog Fi had two puppies a few weeks ago. They are going to keep the boy puppy who’s called Raid, and Dave and I are going to have the girl puppy who’s called Charlie. The pair of them have just started stumbling around and wagging their tails and trying to play fight with each other between falling over. It’s pretty much the most adorable thing you’ve ever seen.

So there we go – we’re about to have a dog to train and feed as well as a house to do up and a garden to tend. We still have occasional shitty days where it rains all the time or we are tired or argumentative, but on the whole, life is pretty fucking epic at the moment.

Maybe I will go and have something to eat whilst waiting for the garden to be in the evening shade so that I can carry on scything.

The Renners braved a trip into the bat cave!

At the cave mouth 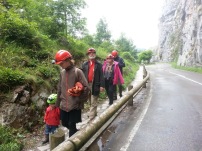 Roger, Dave and me

Signe and Roar in the cave 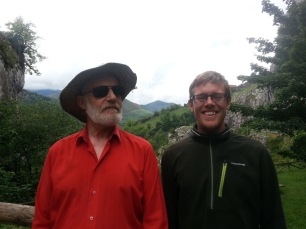 Dave and his Dad 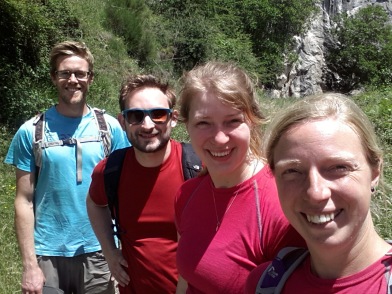 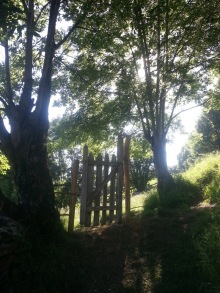 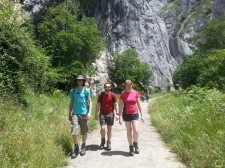 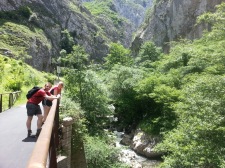 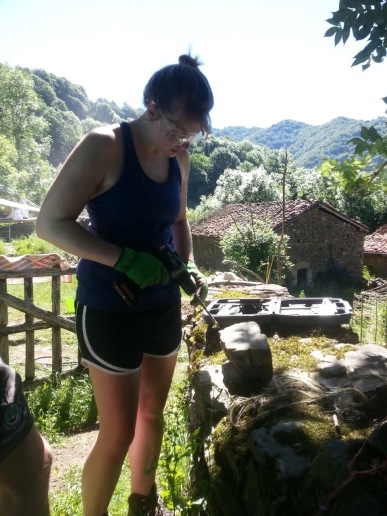 The garden is coming to life

Lots and lots of peas 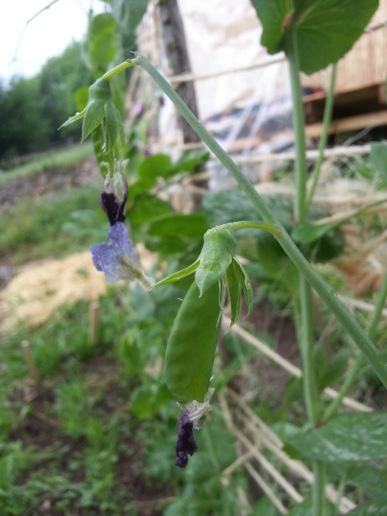 We made some new friends in another valley 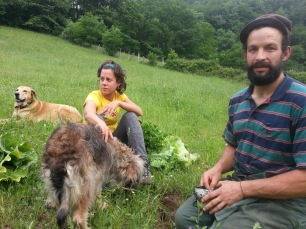 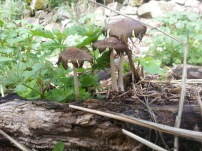 Mushrooms growing in the garden 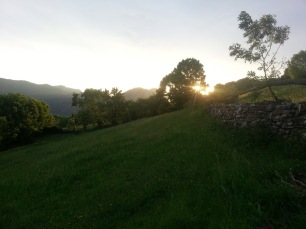 Sunset from the field 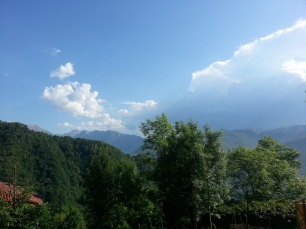 The puppies Charlie and Raid with Mum Fi 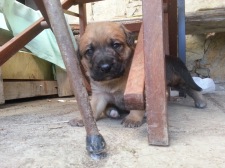 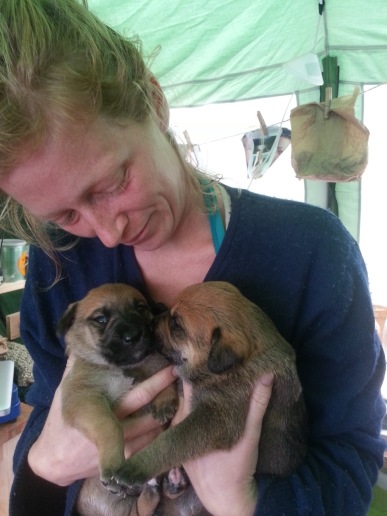 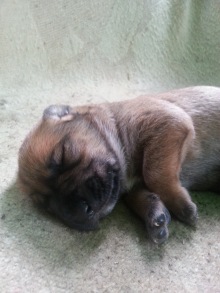