June was all go in the garden, although we didn’t actually do much work in it, it’s just been growing like mad. It has continues to be warm and wet and there are weeds galore, and a hailstorm came and toppled my pea trellis!

The first poppies came up at the start of the month. My ‘three sisters’ beds (corn, beans and squash) have been growing well. And I’m so pleased with my herb beds that are settling in well now. It’s two years since I sowed the seeds.

We’ve been eating peas, kale and herbs out the garden. The kitchen is full of dried thyme, rosemary, oregano, sage, tarragon and mint. And I’ve been collecting lots of wild plants too – the little wild plums are ripening, I’ve been making nettle pesto, elderflower cordial and herbal infusions with heal-all, lemon balm and mint.

I’ve taken an interest in herbal remedies too, and found out that there are plenty whose effectiveness is proven by double-blind trials. I’ve got a jar of oil infusing some St John’s Wort in the sun. The resulting oil can be used on sun damaged skin. I’ve got some comfrey leaves blended up and layed flat in the freezer to apply to burns or sprains as the need arises. And I’ve been treating a mild case of conjunctivitis with plantain. It’s very satisfying. 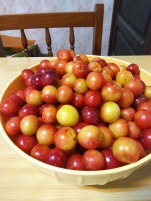 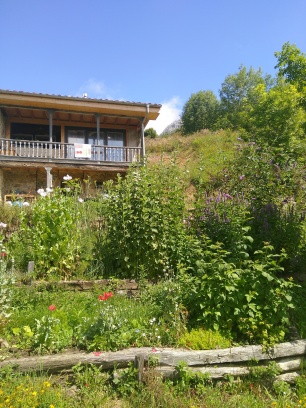 We were getting frustrated with the slow progress at the beginning of the month, so the last few weeks of June we focused more on the house. We ordered the wood for the mezannine and brought it up the hill one afternoon. It is starting to take shape now. Dave has bolted the beams together and glued the wood beams onto the metal ones (as a base to built off). We put a wooden ledger up on one side for the joists to hang off, and I nailed the joists onto it.

Dave in the bedroom

Carrying joists up the hill

Leona started crawling, then pulling herself up to standing and is now intent on trying to cruise / stand / climb on everything in sight. It’s nice watching her learn and concentrate so intently (good thing really, since you can’t take your eyes off her without her endangering life and limb!).

We have entered the ‘new normal’ in Spain so our travel and activities are unrestricted save for social distancing measures and use of masks indoors. It’s so nice to be able to meet friends again. We went to a solstice party with no restrictions on numbers, which was wonderful.

Wheelbarrow rides are a hit

Exploring in the park 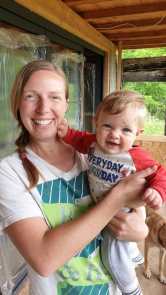 Exploring in the field

I got a possible diagnosis from my neurologist. It seems I have an autoimmune condition that is probably Neuromyelitis optica (NMO), although it could be MS. She says we’re going to do a preventative treatment assuming it’s NMO because it’s a more aggressive disease and you don’t recover in between attacks. I’m quite keen not to go blind in both eyes, lose the use of my legs, or lose control of my bladder and bowel, so I’m trying to get the paperwork sorted to get myself a Spanish healthcare card since my insurance doesn’t cover the cost of the medicine which is 2,000€ a year. I was expecting this news to get me down but honestly it just feels like more crap to deal with. It’s not a definitive diagnosis, autoimmune conditions are so individual so it’s not like there is any known prognosis, and it’s probable that stressing about it would only exacerbate the condition anyway. So just more research and hospital trips and blah blah blah for now. Maybe it will hit me at some point but so far I’m just getting on as usual.

The rheumatologist thinks I probably have Grave’s disease as well, an autoimmune condition that causes my thyroid to be overactive. Anyone who knows me well won’t be surprised that the list of symptoms includes being unable to tolerate heat, having an increased appetite, increased sweating and feeling nervous. It’s nice to find out why I’ve spent my life eating like a horse and getting evils from other commuters in scarves and coats whilst I’m stood in a t-shirt trying to open all the windows! Ha.

I found that there is a small amount of evidence that changes in diet and lifestyle can improve certain autoimmune conditions. Inflamatory bowel disease, arthritis and certain thyroid-related autoimmune conditions have been shown to improve or even go into remission when patients try the Autoimmune Protocol (AIP). The lifestyle involves low stress, moderate exercise, lots of sleep and a high-nutrient diet that aims to reduce inflammation. You eliminate everything except vegetables, fruit and meat for 6 weeks, then gradually add foods back to find out whether they make you feel worse. Seems like it’s worth a try! The meat aspect of it is less than appealing, especially since the recommendation is to have as much fat and offal as possible (trying not to puke as I write). And from an environmental and cost point of view, I want to source parts that would otherwise be discarded. So no jamon Iberico for me unforunately! Just fried liver and onions with a bone broth to wash it all down – just close my eyes and try and think of all the vitamins it contains. And if none of it makes a difference then I can go back to cheerily adding soy chunks to my stir-fry!