We woke up just as the sun broke over the hills, and managed to pack away and have breakfast in about an hour and get on the road.

We chatted away as we rode, commenting on how much we enjoy the morning part of the ride, once the initial unpleasantness of getting out of the sleeping bags is dealt with. There were lots more storks (all those cranes we saw before turn out to be white storks (Ciconia ciconia)) hanging around in the fields, looking up at us and sometimes flapping away on their huge wings as we sped past.

There were some big hills on the morning ride today, including this 2 km beast. It did have an equally steep downhill on the other side though, which was fun!

Depositing in the altitude bank

Anna pointed out some strangely shaped clouds in the distance, which turned out to be formed from two massive cooling towers from the power station at La Robla. The cement factory there probably accounted for all the quarrying we saw. We hoped to find some shops and wifi in La Robla, but when we got into town it was still only 10 am, and things didn’t start opening till 12, so we pushed on. We did eventually manage to access the outside word by sitting on the steps of a hotel in a town called La Magdalena, and getting on their unsecured network. Funny how you care less about that kind of thing when you’re trying to travel on €30 a day!

We pulled into a beautiful village called Riallo at about 2 pm and sat down outside a popular looking bar for a drink and to continue our internet tasks. We were trying to plan our route for the next few days. At this point we got chatting to a guy who’d retired to the area from Barcelona. He didn’t have much English, and our Spanish is still awful, but he started recommending a different route to us, since our one apparently contained too much uphill. After about half an hour of negotiations with him, two of his friends and a younger guy with a smartphone who showed us the suggested route (which was supposed to be 62 km of downhill to our next big town of Bembibra) we said “Gracias y Adios” and they left. Anna was keen to push on, but I had had enough for the day and said I didn’t think I could do it. Anna said “of course you can” which of course I took as a challenge, so off we went. We forgot to go to the shop, which we had meant to do before setting off.

The first part of the ride was indeed downhill, along a beautiful quiet road which crossed and re-crossed a wide, shallow river banked with mixed woodland in springtime bloom. Things started to go wrong when we took the wrong turning at a roundabout and did about a kilometre in the wrong direction. This might not seem like much but when you’re tired and hungry it’s a big deal. So I started sulking and we did the next 2 km in an awkward silence. We got to the bottom of a steep uphill and stopped to have a good argument. I said that Anna hadn’t listened to me when I said I wanted to stop at Riallo, and she said that she’d offered to stop a few km back if I wanted to. I said I wasn’t going to take responsibility for calling a halt when it was in the context of her wanting to go on and me spoiling the fun. Anna said we could go back and camp at a spot we’d passed which looked flat and near the river, but I refused to go back, said I felt fine and started off up the hill. It turned out to be a very big hill. By the time we had got to the top we had managed to argue to the point of exhaustion, so we both apologized and agreed to get on with it and find somewhere good to camp, since the promised 62 km of downhill to Bembibre was clearly lacking.

There was a great view from the top of the hill across a plateau of heather and trees at the side of the road which dipped into a wide valley and then layers of blue hills in the far distance.

View from the top of argument hill

We went up and down a couple of long hills before I spotted a likely looking campsite by the side of the road just before another massive hill. There was running water and a flat (ish) grassy area and it was partially hidden from the road by a bank and some small trees. I checked it out and decided (probably due to desperation) that it was suitable. We got all the gear and the bikes down the bank and I started to cook while Anna looked for somewhere to put the tent. She pointed out that my description of the grass as “a bit hummocky” was a massive understatement, and the ground was in fact exclusively made of hummocks. I had to acknowledge this, as well as the high density of biting insects, and the dubious presence of animal dung near the stream. We decided over dinner that it was in fact an awful campsite. Once this was agreed we made the painful decision to press on. We had a quick wash from the water bottles (not recommended) and cleaned our teeth hoping that we would then be ready for bed as soon as we found a vaguely suitable site. 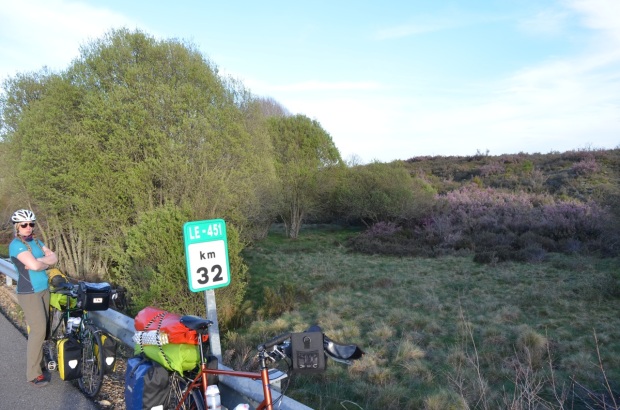 We lugged the gear back up the bank and onto the road and pedalled oh so slowly up the hill to the pleasantly named village of San Feliz de la Lavenderas. They had a beautiful old church with a stork nest (complete with baby stork on the bell tower), but on the downside, no hostel or campground. 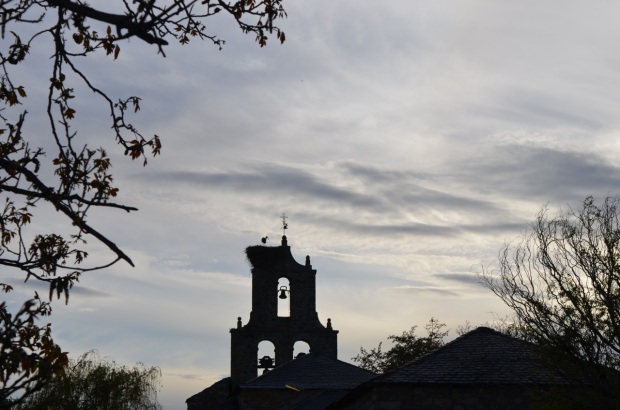 We were following Google Maps down a track that was supposed to lead us back to the main road when we met an old guy who told us that it didn’t actually go back to the road at all, and shepherded us back towards the village. Two other guys then set us on the right path out of town. We were so tired by this point, and almost as soon as we left the village Anna spotted a flat bit of land by the side of the road that supported some big sweet chestnut trees, but no signs of cultivation. It was a great campsite apart from the spiny chestnut shells, which had to be cleared away in case they punctured the groundsheet. They were certainly capable of doing this; they went straight through our gloves as we used our hands to pick out the last few after an initial foot-sweep. We got the tent set up as it got dark and crawled inside, still sweaty and gross, to try and get some sleep.

So, my lessons learned from the day: 1. don’t blindly accept advice relating to gradients from non-cyclists; and 2. if you need to stop, put your foot down!