We thought we were in for rain all day today and we were knackered so we set the alarm for 9 to make the most of our luxury two star hotel. I was worried we might have to check out by 10, but Anna pointed out that was unlikely since nothing opens here till 11. Fair point, and so it proved.

When we woke up sure enough it was still raining! We had breakfast (muesli with powdered milk) in bed then reluctantly started getting ready to head out. We loaded the bikes in the underground car park and headed up the ramp to find that against all expectations the rain had stopped and the air had that beautiful clear crispness that follows a good downpour. So we set off in good spirits and superfluous full waterproofs, which had to be removed fairly rapidly. 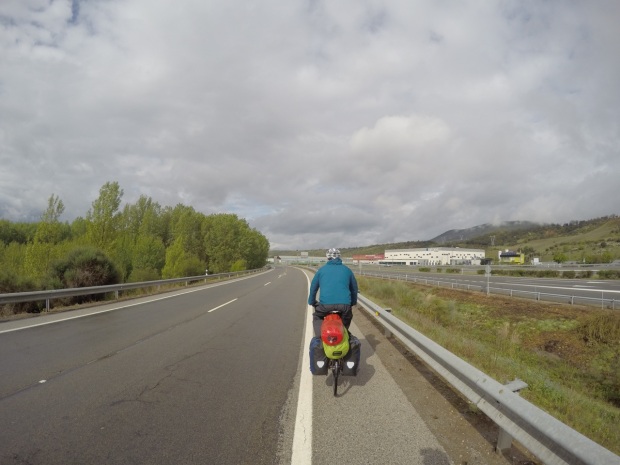 It was a pretty, cloudy day, and the clouds made fascinating shapes against the distant mountains.

It was mid-morning on Saturday and the traffic on the motorway was a nightmare. Don’t know how we got through it.

We only had 30 km to do today to reach our campsite at Villamartin de la Abadia. There were a couple of climbs but the majority was flat or downhill and we covered the distance quickly, stopping for a quick lunch of cheese, avocado and chorizo rolls on the outskirts of Ponferrada just after crossing a beautiful river valley with a great view of the viaduct further upstream. 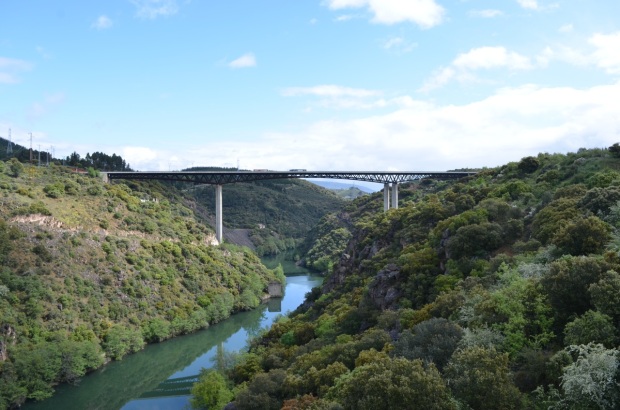 Nice valley. Not sure what else to say!

We got into the campsite about 12 and the weather was still good, so once we’d had a shower and hand-washed our cycle stuff we hung out in a little plaza and had some more food. Anna made the most of the afternoon sun with a quick siesta. After that we played frisbee for a bit – totally worth carrying a frisbee!

Once the shop opened at 5 we went and got some food for tomorrow and came back to cook dinner. The promised rain finally set in at this point, so we have just spent the last four hours stranded under the shelter at the campsite cooking, eating and chatting.

As we were packing up a lovely German couple came over with a bottle of wine and declared that they thought we would like to share it with them. Rude not to, so we had our first wine of the trip chatting about our respective travels. They have travelled a lot in Spain, and came from Santiago today – it’ll take me and Anna about 5 days to do that in the other direction! They have also been to the UK – they think the Highlands are the most beautiful area, and they are very taken with the ‘park and ride’ concept. Probably wouldn’t be on my adverts for visiting the UK, but maybe it should be! There are no photos as we were separated from our cameras by lots of falling water.

We finally made a break for the tents and I am writing this up with the rain hammering down on the fabric and knowing I’m going to have to go outside in a minute and put the cover on my leather saddle. D’oh!