Once again we slept past everyone else in the hostel. These pilgrims are a dedicated bunch, up with the lark. We had breakfast and headed off knowing we had a pretty easy ride to Santiago ahead of us, and we had accommodation booked in, a rare sense of planned-ness which wasn’t altogether welcome as it took away a bit of the mystery about the day. Will we get mauled by wild boar or washed away by a flooding river? These are the things that give the spice to life!

We headed straight into a sunny morning and a long downhill section, it feels great to get the first kilometre under your wheels without pedalling! We were soon paying for it by climbing back up the other side of the valley, which warmed us up nicely. 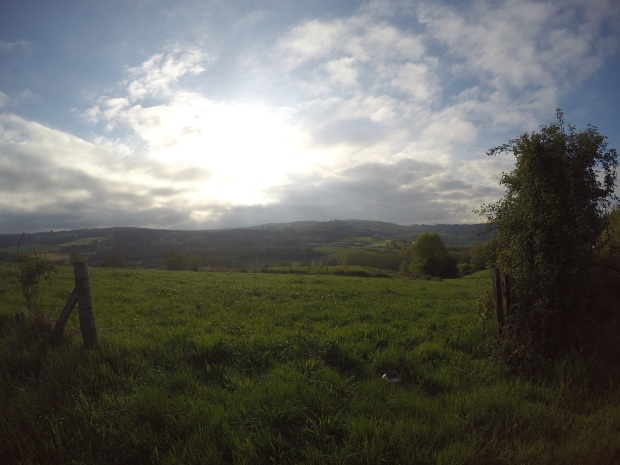 We were on a main road for most of the day and the traffic was relatively heavy, which was ideal for instigating our regular mid-morning road position argument, but thankfully it was relatively short-lived today and by first lunch all was well with the world. We rolled along enjoying the flowering plants and shrubs that crowded the roadside. 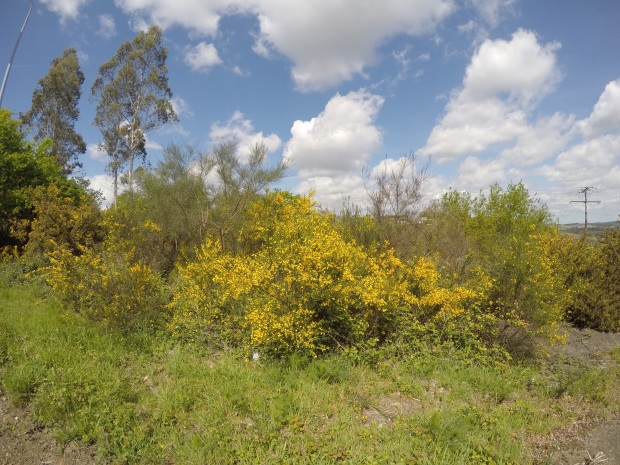 The distances to Santiago on the road signs were becoming tantalizingly small; I was excited by 33 km, but Anna only got the bug at 19 km out. 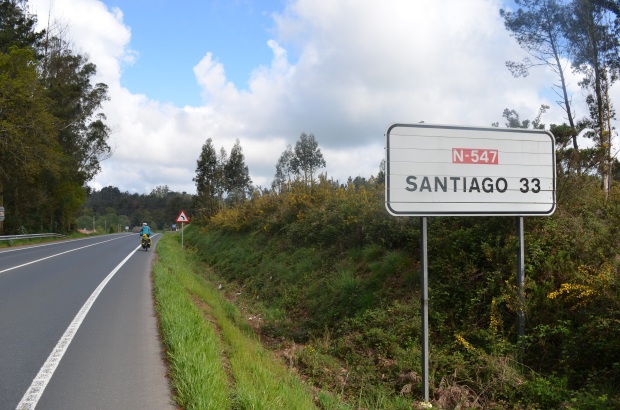 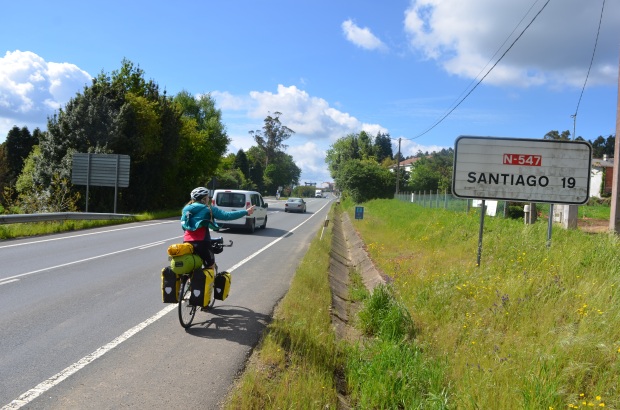 When we got close to the outskirts of town we tried to find a minor road route in, but after a few hundred metres of beautiful country lane (and the most insanely steep hill we have encountered thus far) we found ourselves back on the main road, so we accepted it and bumped into town alongside the lorries. The town centre it didn’t disappoint. We needed to find a bike shop and the search took us through beautiful steep narrow lanes with old buildings on either side bristling with shop signs selling everything you can think of. We found the bike shop with its penny-farthing sign outside only to find that is was, of course, closed for lunch. So we went off to find the hostel.

We searched around the area we knew the hostel to be for a good 20 minutes. There were roadworks going on, and a JCB-mounted pneumatic drill was hammering away in the street, which made it a bit hard to concentrate. It turned out the hostel was behind a small, unobtrusive door right by the epicentre of the seismic activity. With some trepidation we went in, making sure to find out what time the roadworks start and finish. We decided 8 am – 6 pm was ok so we presented our passports and booked in.

Upstairs we got chatting to a German guy called Martin who had walked the French route of the Camino from St Jean Pied de Port in France, a distance of 850km! After having a day off he had decided to cycle home to Germany, so he wanted to go to the bike shop to to buy a bike. We decided to head there together after lunch and in the meantime showed him how our panniers worked and tried to think of things he would need to think about.

At the bike shop Martin mananged to get a bike, panniers, a multitool, a drinks bottle and some other kit, as well as an all-important Camino cycle jersey all for €850. A bargain; we felt we had done badly at €28.50 for 8 brake pads and a mirror!

Martin’s friend Nils met us at the bike shop and then we went on to meet some of the others guys they had met on the walk outside a café for beers in the glorious afternoon sunshine. They were a great bunch, and it was nice to see them all chatting and swapping stories about their experience. It was interesting that hardly any of them seemed to be doing the Camino for “religious” reasons, but I would say they all seemed to get something spiritual out of it. They were all keen on going to the Mass at the cathedral but it seems that the massive swinging incense burner is the big draw rather than redemption. 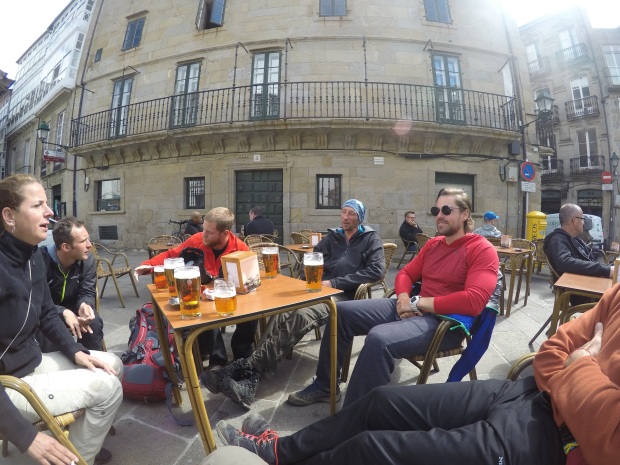 We met a guy called Anton who comes from the Velebit area of Croatia, which is where one of the Rewilding projects is based. We were asking about the area and its culture and he confirmed that it is very beautiful and we should definitely go! We were asking about the history of Croatia and that included the independence and civil war era, which was 1991-1994. He is 38, so he was a young teenager during the war. He said his parents lived in the South, which was in the warzone, and he and his twin sister were sent North to Zagreb, which was a more stable area. It is so strange to hear those kind of stories from people who seem so similar to me. It sounds like (and is) a massive cliché but it does make you realise how lucky you are, and that your problems are really not that big a deal! Anton’s parents have passed away now (although not as a result of the war), and he walked the Camino partly because his Dad had done it. I didn’t want to pry any further but I was glad for him as it seemed like he had just completed something important – it was a good time to meet him!

Some of the group were heading home that evening, so there were 5 of us left who decided to go to dinner. It was a good chance to hear more stories from the walkers. Jean-Philippe had slept in a donation-based hostel where Martin had stopped for a coffee but then declined to drink it due to hygiene concerns. There were some pictures and it looked pretty basic, but that is one of the things I’ve been realizing on this trip. You don’t need to wash your hands every five seconds, and a grubby glass probably won’t kill you! Anyway JP was happy with his night’s sleep, and delighted the hosts made them coffee in the morning!

The main thing everyone seemed to agree on was that you have to walk your own Camino in your own way and for your own reasons. Everyone nodded sagely at this, and I could only nod along in incomprehension. I think it must be like Vietnam; if you weren’t there you just don’t know!