Today has been a busy day! We were chatting to a guy in the hostel last night and he recommended that we follow the Camino Portugues down into Portugal. It sounded like a good idea so we decided to go for it. Before leaving Santiago this morning however we had some tasks to complete. The first thing for me was a wet ride to the Decathlon outdoors store to get some waterproof hiking shoes. I’ve had enough of Anna complaining that her feet are too hot while mine have gone numb from cold and wrinkly from water ingress! The second task was a bit sad, we decided to send our climbing gear home. It was awesome being able to go climbing with Silvia and Carlos that first week, but it’s so heavy and it’s just dead weight most of the time. So Anna went in to do battle with the Spanish postal system for half an hour while I hung around outside reading. Seemed fair!

We finally got out of Santiago about 12. It was raining obviously. 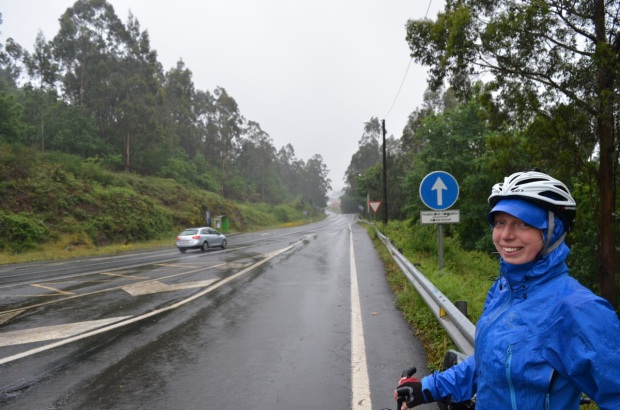 She wasn’t smiling on the inside

We were glad to be back on the road and feeling like we were getting somewhere, but the weather is meant to be awful all week and it was a tough re-introduction! Sideways rain to the face all morning! But my feet were so warm and dry! I even managed to devise a system to stop the raining running off my waterproof trousers into my shoes. Happy days – Galicia holds no fears for me now.

We headed up and down over hill and vale for most of the afternoon, stopping for drippy first lunch in a churchyard and drippy second lunch in a “picnic area” by the side of the road that contained only a bin. No benches or anything. It was the worst picnic area. Anna was displeased.

Sometime in the afternoon I heard a horrible crunching noise from the back wheel. I pulled over to find that one of the bungee cords securing the tent to my pannier rack had caught a spoke and got dragged into the back gears. Thankfully the bungee cord snapped before it damaged the gears, and I escaped with a bent mudguard. That could have been a lot worse!

He served well. We will remember him.

We were on the main road for the rest of the afternoon until we reached Pontevedre. There was an impressive viaduct, and the road cuttings were full of flowering broom, which helped to keep our spirits up. 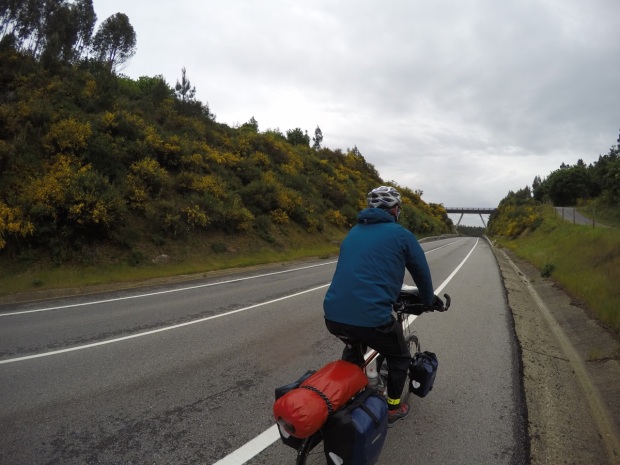 We hadn’t really researched hostels in Pontevedra. This is always an error. You think you’ll just find one when you turn up, then by the time you get there you’re starving and tired and just want to have a shower and some food. So we spent 20 minutes looking for a hostel all the way through town and out the other side. Then just when things were looking bleak we asked a local guy who said “Yes, there’s one just behind you”. And there was, hurrah! We missed it because the signs were for people coming into town, not out.

So the day ended happily with hot showers, tasty pasta and an evening stroll into town where we procured food for tomorrow including pic’n’mix. Mmmmmm! Pontevedro seems like a really cool town, bustling and lively and with some pretty architecture. It’s a shame we didn’t get to explore it more, but that seems to be the way at the moment. Maybe we need to budget time for seeing places instead of just getting to them…