We got up before the sunrise! That meant I could faff around taking pictures of the sunrise. Even so, we left camp in record time, on the road by 7.45. Yeah, still room for improvement.

We were faced with a decision between unknown quiet country roads today and a busy main road (which may or may not have been a motorway). We elected the scenic route. It went well at first, from this…. 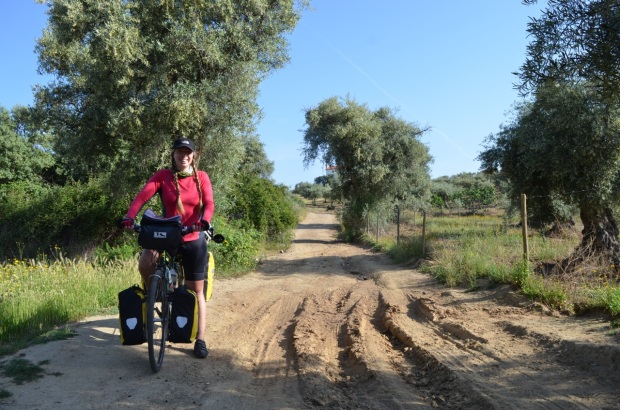 It was a beautiful cool morning though, the birds were singing and the flowers were out. 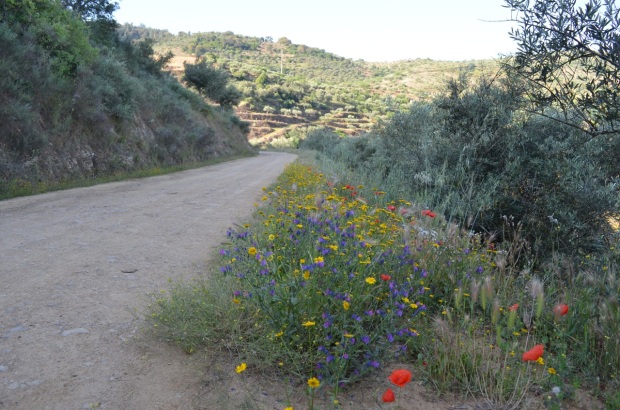 Verging on the sublime

To top it off we we weren’t on a horrific motorway. So even when we had to push for a bit, we were happy!

Luckily for us the dirt track eventually turned back into a road and popped us out close to where we needed to cross the Douro river. We stopped for a spot of lunch on some stone benches in the high street and devoured enormous cheese sandwiches, then crossed on an aged bridge. 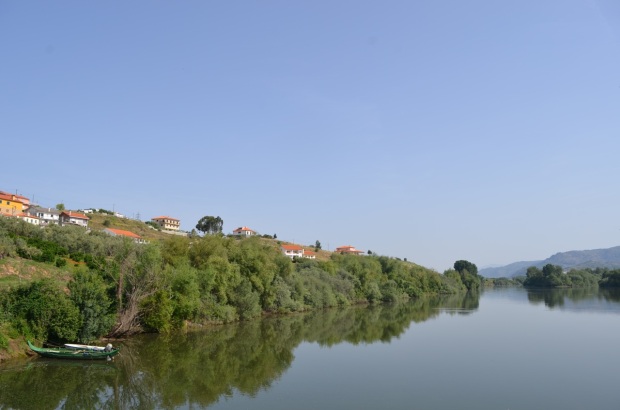 Douro in the sunshine

We were a bit worried about the next part of the ride because as far as we could see, it was on an IC road. We had checked it out that morning and found that in Portugal, IC and IP roads may or may not be designated as motorways. Roads can also have more than one designation. This one was an IC, and N and an E!. The only way you can tell whether you can ride these roads apparently is just by seeing if there are “no bikes” signs when you get on. Thankfully there weren’t here, because that would have meant a 2-3 hour diversion!

So after spending about 2 hours doing 8 km on the dirt track we started burning through the remaining distance on the main road. We climbed the side of the Douro valley and soon we saw a massive dam across the river in front of us. Google maps said we could avoid the dam (and a few hundred metres) by taking an alternative bridge. When we got to it however, it was definitely a no-go! It turned out to be an old railway bridge that was slowly rusting into the river.

Don’t think they want us on here… 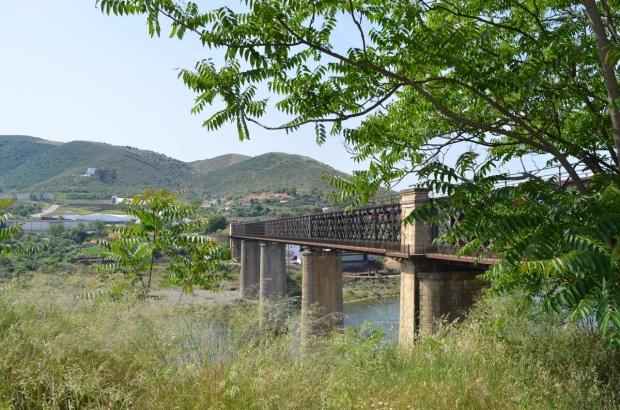 So, we went the long way round, over the dam and continued climbing, the sun was really starting to get to work now, and we were heating up nicely. I felt sorry for this poor guy I spotted; the only person I could see working on the vines in the whole valley! 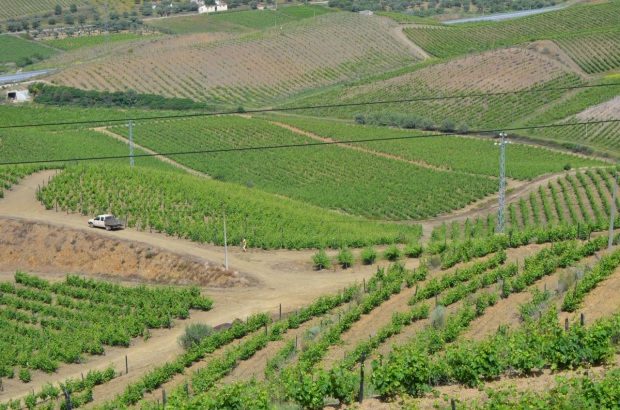 After a bit more climbing we got to Vila Nova de Foz Côa. We expected we wouldn’t be able to check into our room at the youth hostel until 6, as we’d been told at our last Hostelling International hostel, but we decided to see if we could go and drop our bags then hang out in town for a bit. When we got there though, the guy said we could check in straight away. Aaaaaah showers! The guests’ washing machine was broken  but that was no problem either, he took our laundry and did it in the linen washing machine. What a legend!

So, freshly showered and with an afternoon to ourselves we decided to check out the Palaeolithic Art museum. The Côa Valley is a UNESCO world heritage site because of the rock carvings here, which date from 22,000 BCE. We couldn’t visit any of the sites on such short notice, although it is possible if you book in advance. The museum was great, it gave you a good overview of rock art around the world, explained the different eras and styles of art that exist in the Côa Valley, and gave some history of the site and the discovery of the artwork (it was during a dam building project that was eventually cancelled due to the discoveries). There were some replica works in the museum which we photographed for your viewing pleasure. 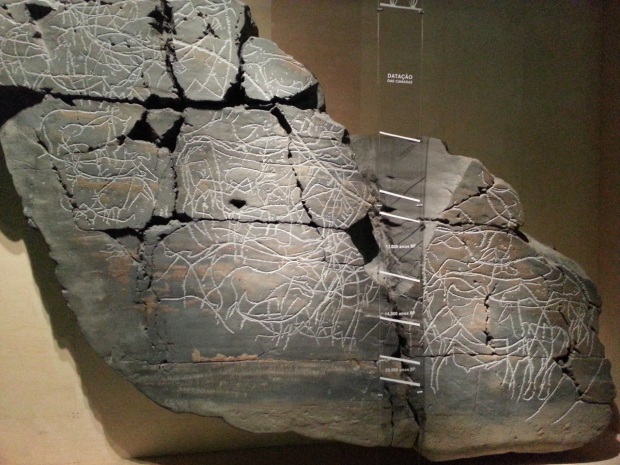 A replica of one of the most decorated panels – there are 94 separate engravings!

The museum building itself was also really interesting. It was built into the ground, which is a great idea from a temperature point of view. It is all bare concrete on the inside and feels pretty brutal, but it’s good to give the artefacts themselves centre stage. Going out into the sun again was not a nice prospect. Luckily Anna has a good hat. 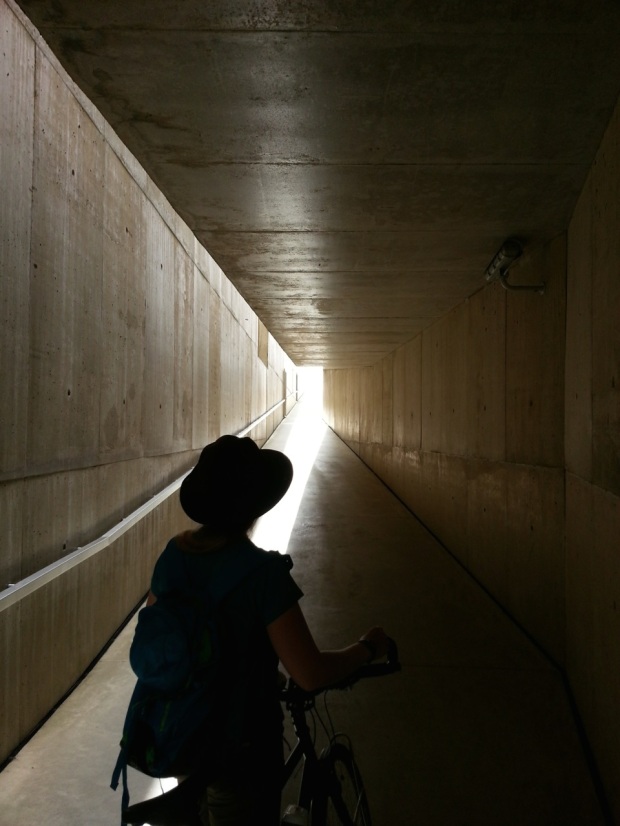 On the way home we found some trees that had shed loads of fluffy white matter onto the ground. I have hayfever so didn’t want to go near enough to establish whether it was flower-stuff or seed-stuff, but it looked cool!

We arrived back at the hostel to find all our clothes freshly laundered. Impeccable service. Now all we have to do is cook dinner and get an early night to set us up for our last leg to the Faia Brava reserve tomorrow. Can’t wait!

One thought on “Day 25 – Gravel tracks and prehistoric art”