Today was our first full day in the Faia Brava reserve. We spent it with Anna, a Masters student, who is investigating the carnivorous mammals within the reserve. Today she was collecting camera traps that she and her colleagues had set, as well as conducting transects to find and record the droppings of carnivorous species. Anna’s supervisor and a friend came along to help out. Johanna who we stayed with last night, also came along to check out Anna’s project. Everyone walked up to the reserve from Algodres, the village where we stayed, a distance of about 3 km. Anna (Heslop) and I planned to camp in the reserve tonight, so we rode our bikes with all our gear up the gravelly track ahead of the others and got our tent set up by the time they arrived. After that we all set out on foot to find the cameras.

It took a loooong time to find the first camera, the only one that Anna hadn’t placed herself. It was a great opportunity to get to know the reserve and enjoy the beautiful display of late spring flowers. They will be gone in a few weeks as the temperature continues to rise, so we wanted to make the most of them!

Assorted flowers (ok I don’t know what they all are)

Yay, we found a camera!

After we found the first trap we stopped for lunch. Anna’s supervisor had brought two rucksacks with her, and over lunch we realised why. She had brought enough food to share stuff with everyone! After what turned out to be a big lunch we moved on to the cameras that Anna had set herself, and we found two in quick succession. At that point we started walking the transects. We were basically walking the paths between the cameras looking out for poo from carnivorous mammals. Once we found some appropriate poo it was measured, GPS marked, bagged and tagged. I say we; to be honest Heslop and I were pretty useless, but Anna and her supervisor were right on it.

After a few poo transects it was about three in the afternoon. We planned to join the Canadian documentary team again this evening to visit some of the rock engravings, so we said bye to the researchers and headed back to the tent. From here we grabbed our bikes and rattled back down the track to Algodres. 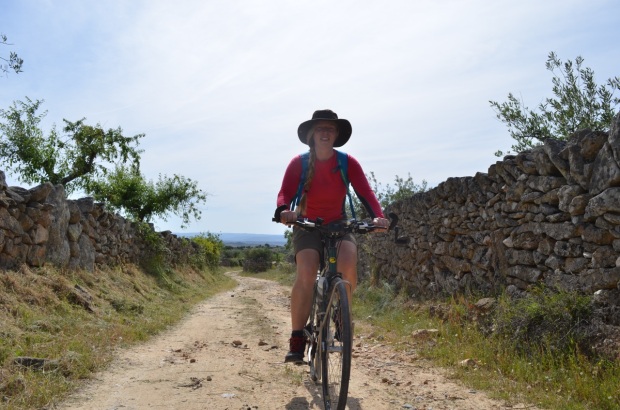 We had showers and cooked some food at Johanna’s house, then walked the 2 kilometres to the pickup point for the rock engravings trip. Sadly when Pedro the Co-ordinator turned up he had bad news – there wasn’t room in the van for us. So hopefully we can go next week instead! Pedro gave us a lift back into town and we chatted on the way back about the species that Anna had identified from their droppings earlier. A new one on us was the Common Genet (Genetta genet) which is a cat-like animal found in Iberia, southern France and the Balearics, as well as Africa and parts of the Middle-east. Anna (Heslop) saw Genets in Africa, but she didn’t know they existed in Europe, and I’d never heard of them. Every day’s a schoolday! We arranged with Pedro that tomorrow we will go to the office with him and Johanna. Apparently there is room for us in the interns’ room. Sounds great! Hopefully we will learn a bit more about the structure of ATN (Associação Transumância e Natureza), the organisation that Pedro and the others work for, and where we could help out.

After we were dropped in the village we got back on the bikes and rode back to the reserve to camp. The sun was setting as we rode back, and we made it to the campsite in time for a last minute meal watching the last red glow of the day over the valley and bats flitting between the trees. Aaaah! 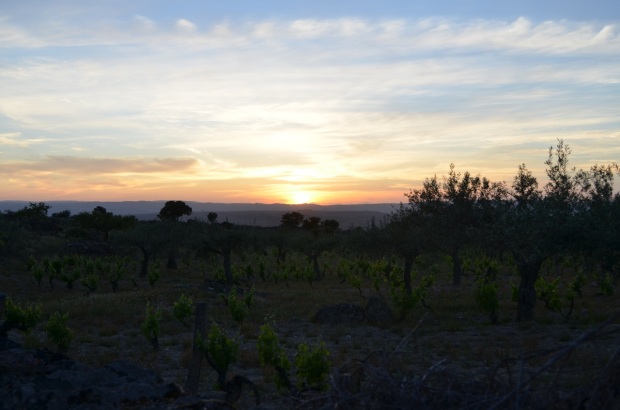 Sunset on the way home