We packed up at a very unsociable hour but we weren’t the only ones disturbing the peace – the birds were already up and making themselves heard! After a quick breakfast of fruit and yoghurt, we were on the road again. Our route took us a little way into the mountains then back out again through farmland towards the town of Ponts. We had a lovely first few kilometers as the sun came up, soaking in the mountain views along a lake. 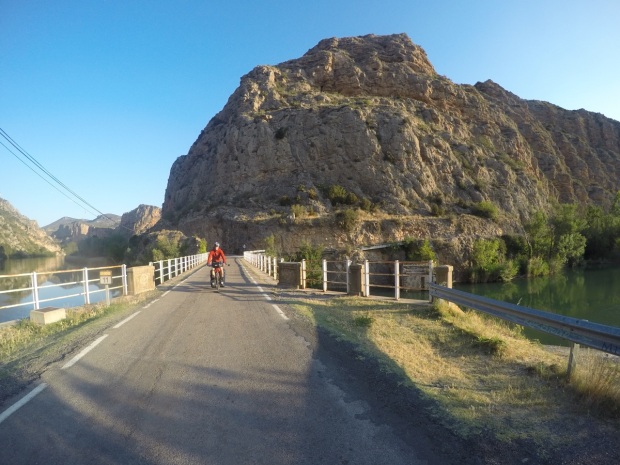 Then we had to leave the lovely mountain road and were taken up and down through fields on the shoulder of the well-used C-13. The truck drivers were considerate but it still didn’t feel all that safe. The scenery was a bit dull but we made good time and (after a short section of steep uphill) arrived in a village for second breakfast.

Our view for the morning

We carried on through the fields, saw corn being harvested, smelled barns full of pigs and chickens and were very sad to see an injured snake writhing around in the road after being hit by a car. 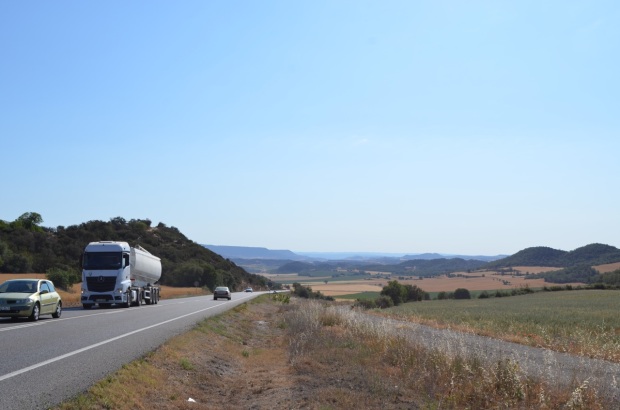 As we approached Ponts, the mountains were back on the horizon and we rode into town around 11am having done 50 km. First stop was the bakery (of course!).  We took our giant pastries to the park and settled down to spend the hot afternoon in the shade.  Dave was just lamenting his tiny roll of belly (we’ve been eating rather well on this trip) when he unpacked his pastry and tucked in… 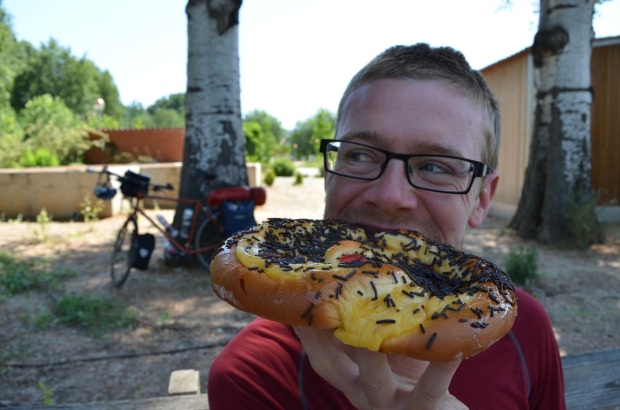 I’ll burn this off in no time, right?

After lunch, Dave realised that one of his new gloves was missing! Nooo! We looked around the park and he rode back to the bakery but there was no sign of it. He was pretty annoyed with himself, having had them for less than 24 hours.

I did some yoga whilst he was searching, then we did a class together once he’d calmed down a bit! Then we discovered the free park wifi and hung out there a bit longer.

We got an email from the organiser at the next project saying that we could go along, hurray! We will be there tomorrow afternoon, it’s only another 55 km.

Once the hottest part of the day had passed, we packed up and headed to the supermarket, which opened for its afternoon slot at 5pm. We restocked, cooked a disappointing dinner and set off for another evening ride. On our way out of town, we saw another tourer! A local man who was out from Girona for a one week trip. We had a chat and he headed to the park for some stealth camping whilst we rode on.

It was still hot as we climbed up the steep hill out of town. The road was still quite busy but the traffic was good to us. We were heading for a big lake on the map to find a wild camping spot.

Evening light over the river

The double riding day is really nice, we get to ride in the morning and evening with a long break in the middle. The only downside is feeling extra sweaty and gross! The possibility of finding a wild camping spot with no running water was plaguing us on our way up the hills. So when we saw a petrol station ahead, we pulled in to ask if there were showers… yes!

By the time we’d both showered and done laundry, it was 9:30 and the sun was down. Behind the petrol station and its car park was a big area of open space and trees and a few picnic tables. There was also the start of a walking and cycling trail, and no signs that said ‘no camping’… looks promising. It wasn’t exactly scenic, the ground was pretty scrubby and there were a few piles of rubble around, but beggars can’t be choosers. We mooched around as it got darker, picked a spot, hung up our laundry, had dinner and then pitched the tent just after 10pm. The moon was coming up, full and bright and big. 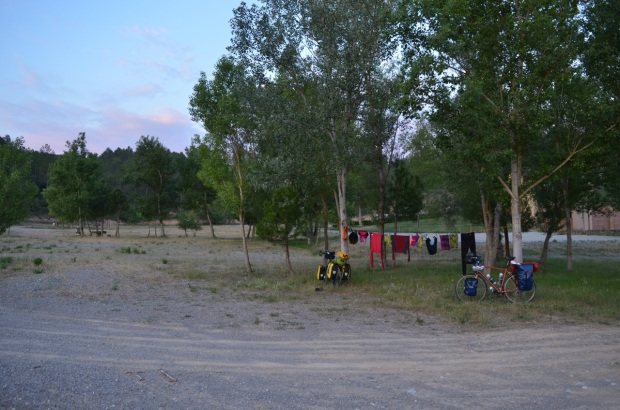 We settled down for the night and were just dozing off when we heard a car come down the track towards the pile of rubble about 50m from our tent. What are they doing in an empty car park at midnight?!

We heard someone get out the car, walk around a bit, then start digging. Digging! Clearly whoever it is has murdered someone and is burying the body right here. Then they’re going to notice that we saw them and kill and bury us too. There is no other rational explanation.

We were both pretty nervous but didn’t know what to do so just lay there peeking out at the headlights and listening for noises. After a while, the car drove around to the other side of the place and parked up there for a bit, making some banging noises. Then off it went and parked at the garage, where the lights were off for the night.

And so Dave went to sleep. And didn’t even wake up when he drove back down half an hour later, headlights shining right into the tent, and parked somewhere else, did something else, then left again.

Not sure I slept very much… and how I will hate that 5:45 alarm!