We breakfasted with Carles and enjoyed more nice chats over museli. Then we drove down to the visitor centre in Alinya at 10am to meet the hikers he would be guiding. They were three local people from La Seu, down in the valley. We all introduced ourselves then Carles gave us the plan for the day – we would drive to a village further up the mountain then walk up past some huge rock formations to a ridge. From there we could enjoy the great views before heading back down a different route to make a loop back to the village. We would be going from about 1200m to around 1750m.

So off we went and parked the cars at the hillside village, the stone buildings overlooking the valley below. We walked past more potato caves and learned about the traditional farming methods here. The people would have kept the potatoes in the caves until the price was good enough to make the long journey down to the valley by mule to sell the potatoes at the market. As well as potatoes, they would have grown cereal crops here in the terraced fields on the hills and kept sheep and goats. 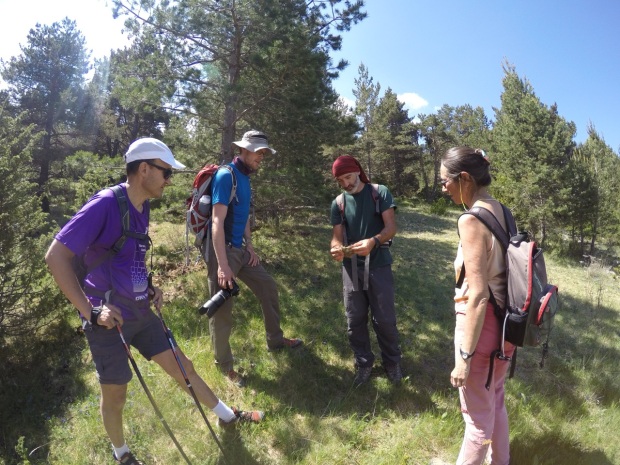 We walked between two huge rocks on our way up the valley. The mountains here were formed by tectonic movements and have since been eroded by wind and water. The harder rock has resisted erosion for longer and so you can see huge sections of mountain sticking up out of the ground in places, forming ridges, peaks and ledges. The trees like to grow along the cracks, highlighting the layers in the rock, so you can see that the lines sometimes run horizontal, sometimes vertical and all other variations in between.

We walked passed different types of vegetation. At the beginning of the walk we were in a Mediterranean habitat with shrubs and oak trees. Then we went up into the Scots pine and juniper. Above us, starting around 1800m, were black pines that grew up to the tree line.

We walked through forest and then wildflower meadows to the ridge that was our summit for the day. The rocky ridge was exposed to the wind and, although calm today, all of the plants were growing close to the ground to protect themselves. 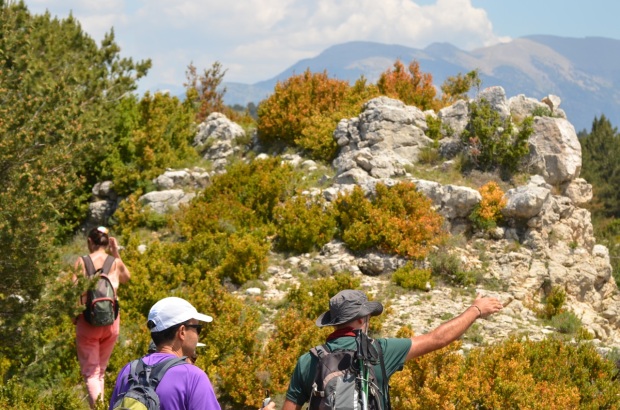 Up to the ridge

We stopped for lunch with fabulous views of the landscape. From there, the rock formations, human impact and vegetation patterns we had learned about were all on display. 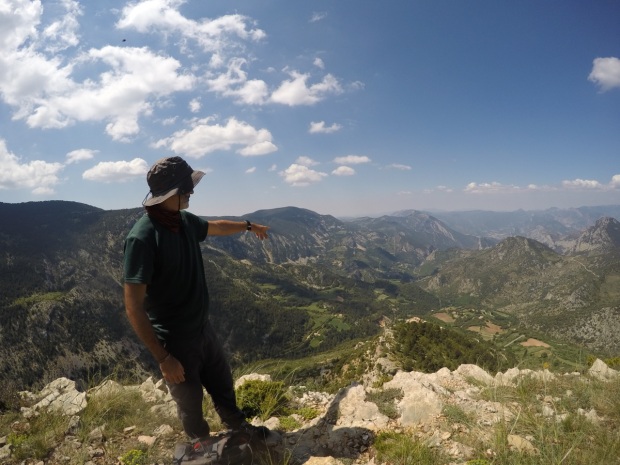 Carles at the summit 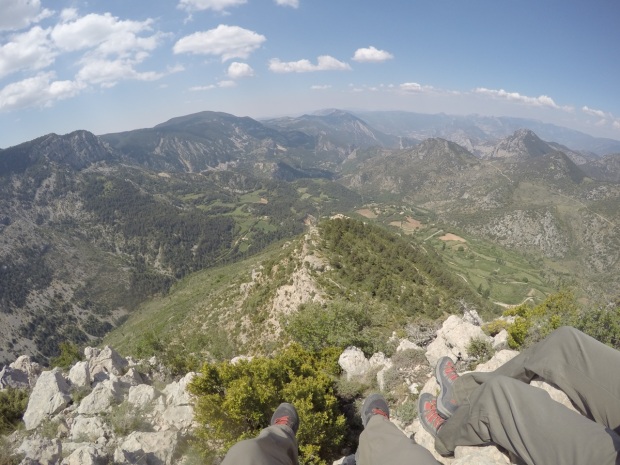 After lunch, we walked back along the ridge and spotted a type of mountain goat called an isard! They’re very shy and it scampered up a crazy ledge to escape from us. Then we had to make our way down through some forest. It was an old trail that hadn’t been maintained and we scraped our way past Scots pine and spiky juniper bushes to make it out to the wildflower meadows once again. 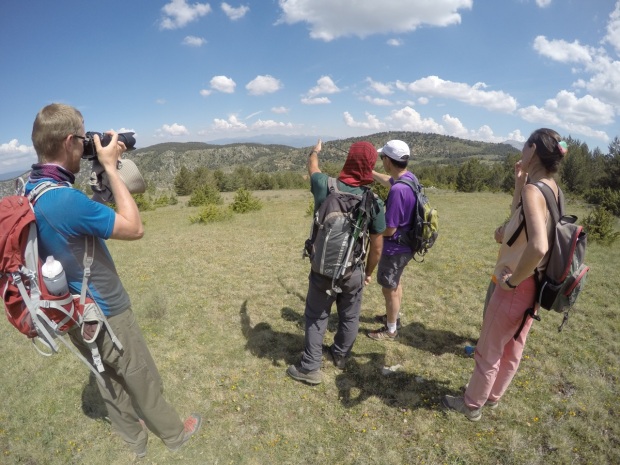 Which summit is which? 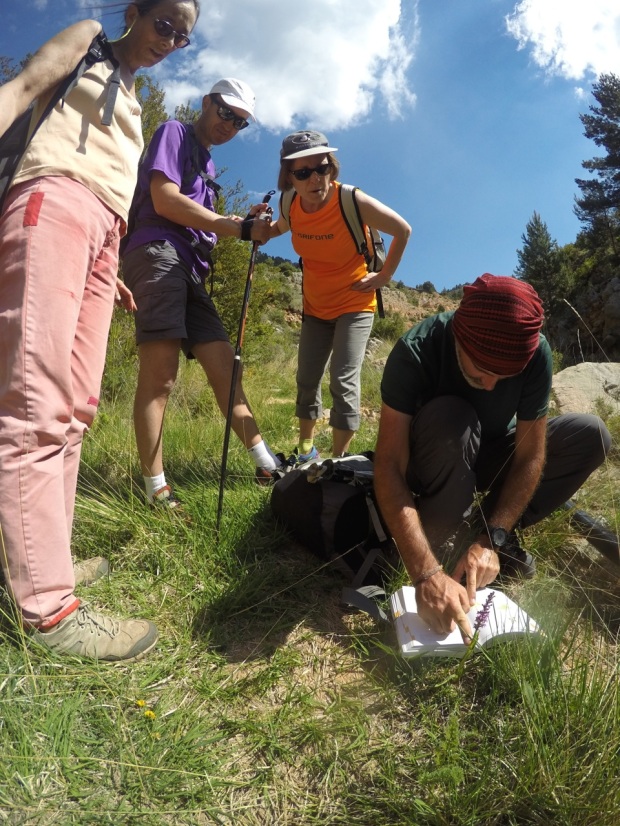 When we were about half way down, the three local hikers decided to take a short cut to the car since they were in a hurry to get back to town – Adieu! Then, with time on our hands, Carles decided to take us on a little detour.

There was a storm brewing in the north and a cool wind was blowing, sweet relief from the afternoon sun. We chatted about the valley, its people and its landscape and Carles told us some of what he’d learned from the people who had come on the walk. One of the women had grown up nearby and said that she had come to Alinya for mass with her parents. The village of Alinya used to have a rectory and a school. The rectory is now used as a visitor centre but the school is long run down. The lady said that the last rector here was a woman who had moved to Alinya to be away from it all but still in a community. She held mass and helped the people in the community until she was too old to stay on the mountain and moved to the valley before passing away in her 90s.

When we reached Alinya again, it was early evening and we looked at the rectory with fresh eyes. Then took a silly picture! 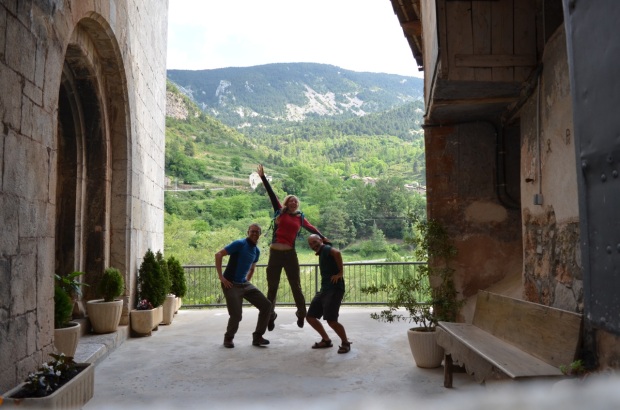 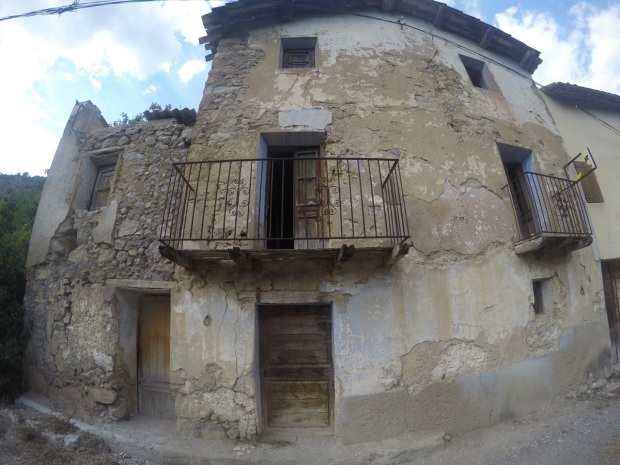 Carles was reluctant to head back home to his town near Barcelona so we all went for teas and coffees in Alinya. We spent hours talking about sustainable living, Transition Towns, cycle touring, inspiring adventurers, and our plans for the future. Carles and his girlfriend Anna had a lot of inspiring ideas! They grow their own food, she makes her own soap and they are part of a local co-orperative. Carles has plans to set up a community bike shop where you can learn to ride, rent bikes and go to the workshop to fix your bike. It felt so good to share stories and ideas with someone with similar values.

At 7pm we were hungry and Carles had to start his drive home so we parted ways. He’s a great guy, I hope we will keep in touch!

Dave and I headed home on the walking trail, which is much shorter and steeper than the road. We collected a few elderflower heads and soaked them overnight to make cordial.  We had fajitas for dinner (sort of – the supermarkets here don’t have much in the way of foreign food, so there were a few substitutes to be made!), and went to bed.

I’m hoping we get a day off tomorrow – there’s so much to catch up on! Whoever would have thought you could be so busy without having a job!