We wanted to get an early start today to maximise our chances of seeing some wildlife. We got up at 4.55 and enjoyed a tasty breakfast in the hut. We were joined by two mountaineers who were planning to climb Piz Quattervals, which towers at the end of the Cluozza valley and is the highest peak you can climb in the Swiss National Park. The sun was already bathing the peak in a pink glow as we ate, although it wouldn’t reach our side of the valley for several hours. 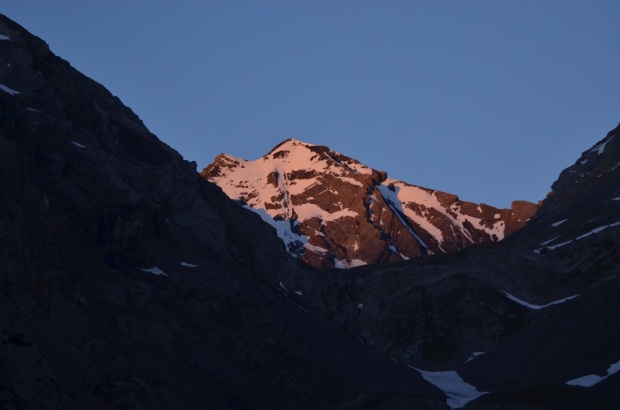 We wished the intrepid explorers a safe climb, and headed off up the valley. We climbed through the forest in the dawn light, with the air fresh on our faces. We heard a nutcracker in the trees, and Anna was quick enough to get this photo, which we lightened a bit so you can see it! 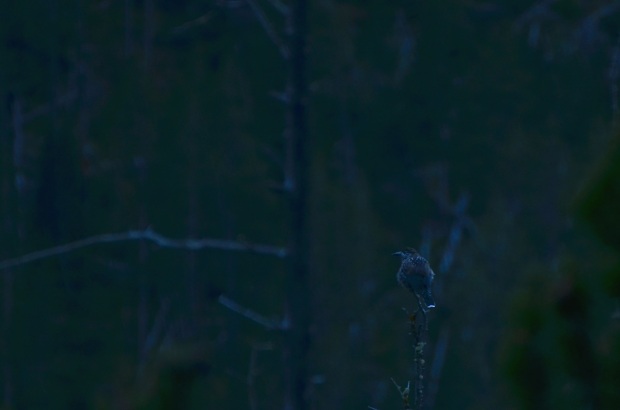 As we came out of the forest we could hear the whistling alarm calls of the Marmots telling each other we were there. They were wary, but usually at least one stayed outside the burrow to keep an eye on us, while the others scampered to safety.

As we came over a ridge we found ourselves face to face with a Chamois, who seemed surprised to see us, and stood staring for a while before nimbly making his escape around the hillside. 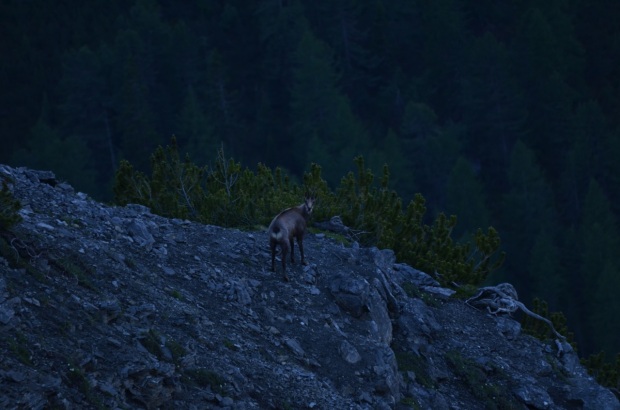 We could see red deer and chamois along the top of the ridge we were climbing up to, and we also spotted a young deer quite close by before it too made its escape. 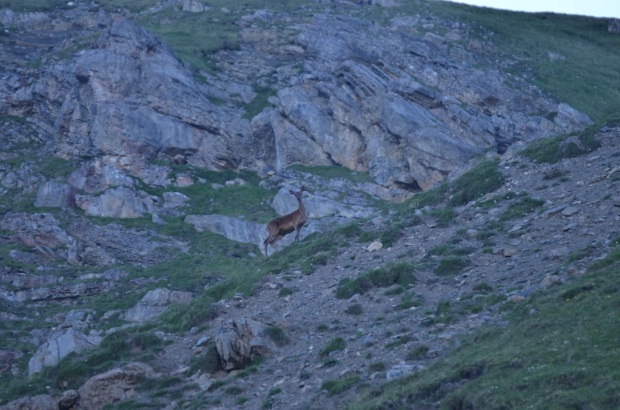 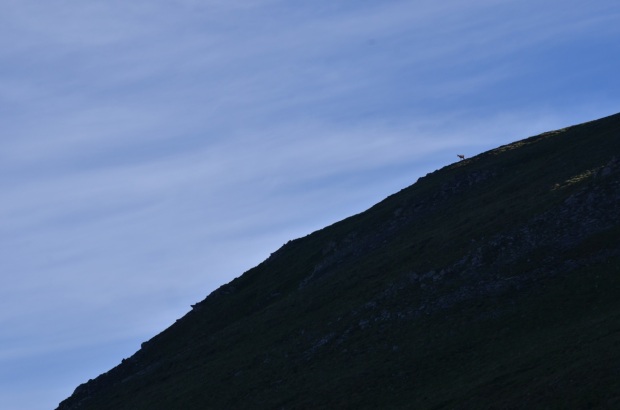 We got to the saddle as the sun was starting to light up the eastern slope of the valley we’d just ascended. We stumbled across a marmot very close in front of us. He knew we were there but seemed more interested in watching the valley in front of him than worrying about us. 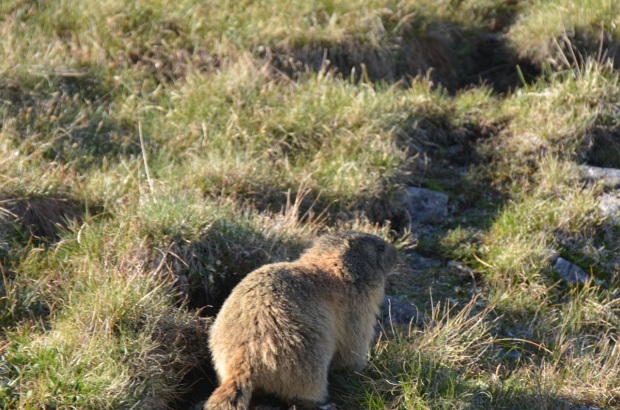 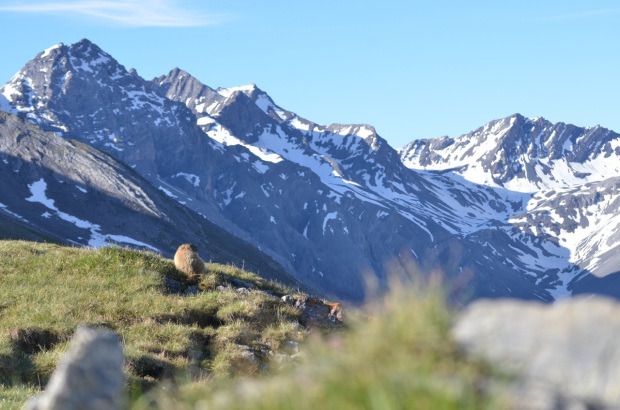 We’d taken our time getting to the top so we decided to see if we could spot the mountaineers on Piz Quattervals, who had said they would take about three hours to do the ascent. We focused the binoculars and – there they were, just above the snowline! We decided this was a good excuse to have something to eat and hang around until they go to the top. In the meantime we enjoyed the wildlife. There were red deer on the slope facing us, wary even at a distance.

Just then we spotted a small marmot approach larger one and start pawing at it. The larger individual turned round and we were treated to a marmot duel. It looked similar to an elephant seal fight, but with less tearing of flesh and bad feeling. Afterwards things seemed pretty friendly again. 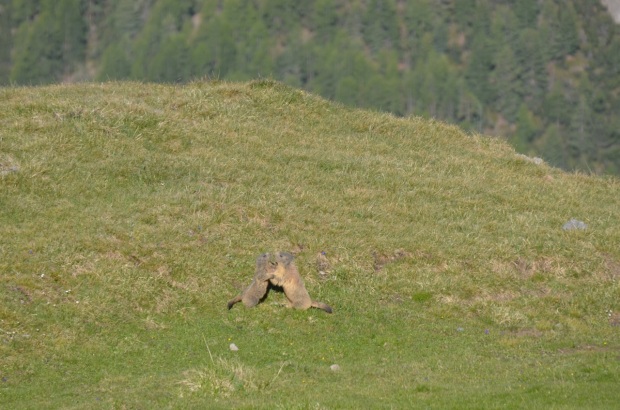 We hung around and enjoyed the views of the Val Cluozza we’d just climbed, as well as the panorama to the southwest. 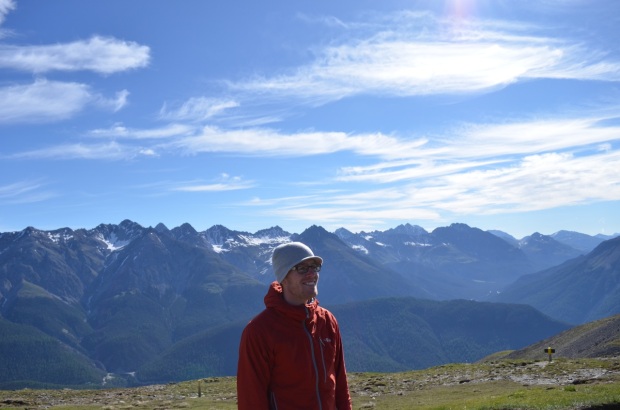 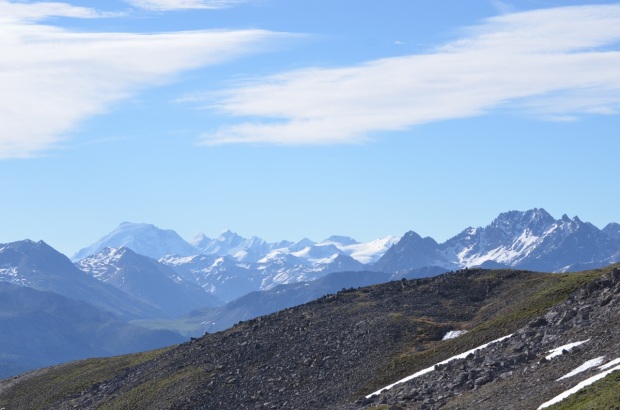 After a while we checked on our climbing friends again, and they had made it! They were miles away up the valley but we reckoned that through the binoculars we could see them taking photos of each other. Fair play to them! 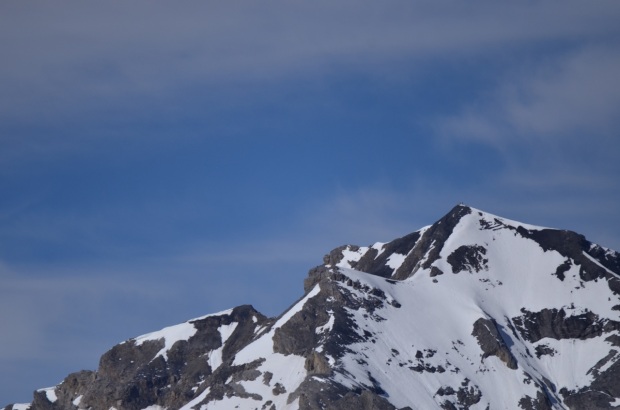 They made it (see the tiny dots on the top?) 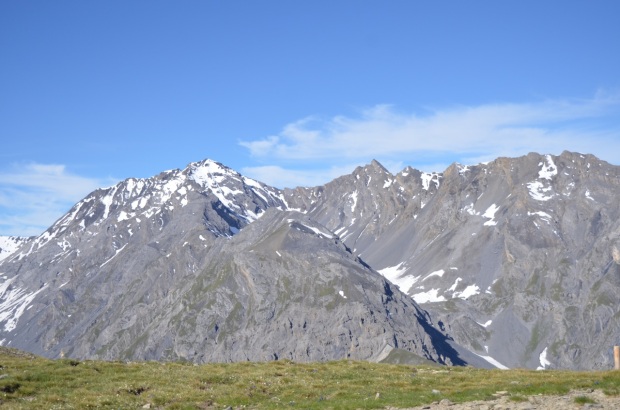 Reluctantly we headed down the mountain, enjoying the many wildflowers that dotted the alpine meadow (for descriptions see here). Anna also enjoyed wearing my new ski mitts that I bought in San Moritz. I figured at least they would be hard to lose! 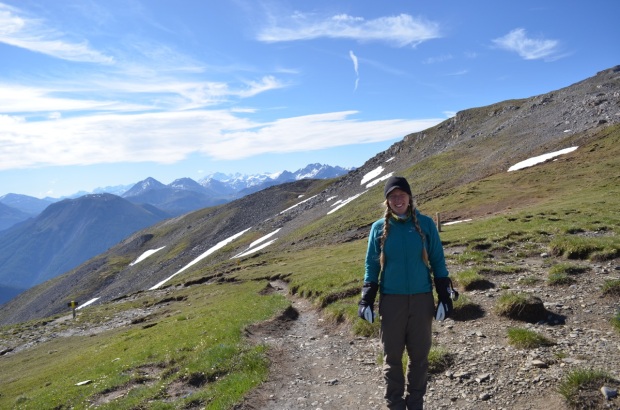 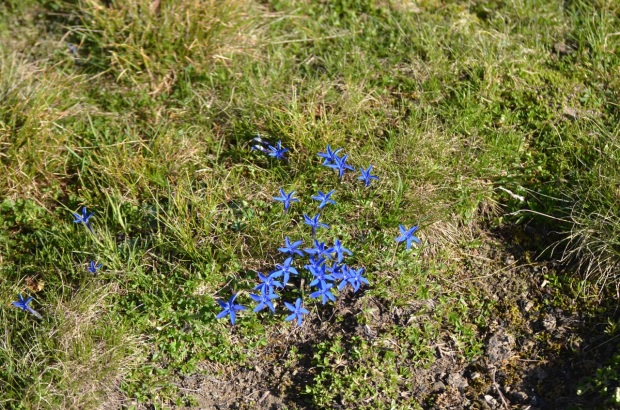 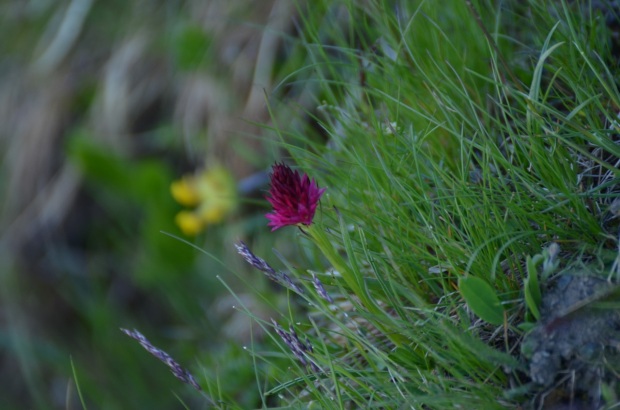 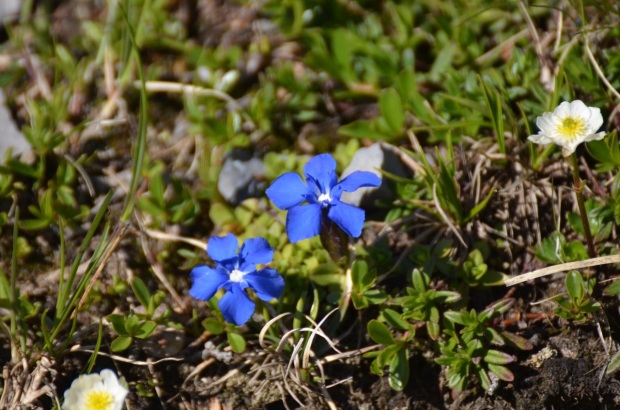 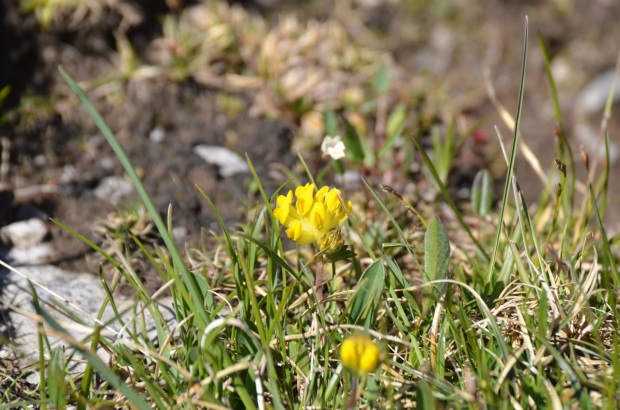 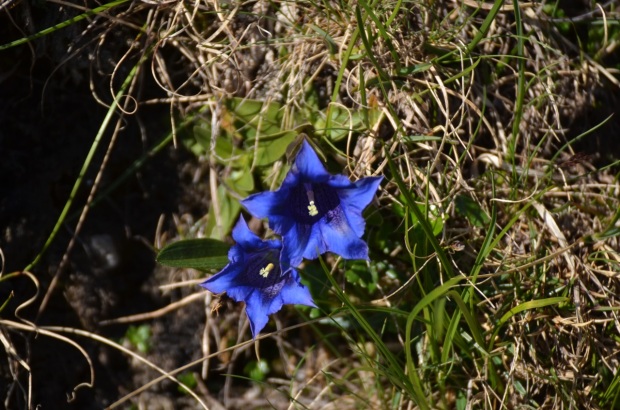 How many flowers are there?? 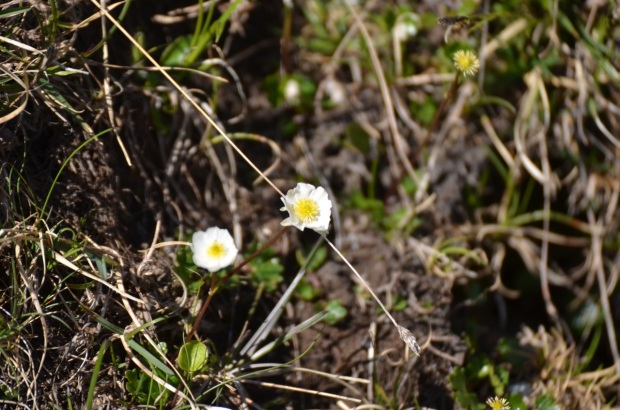 OK, that’s all the flowers 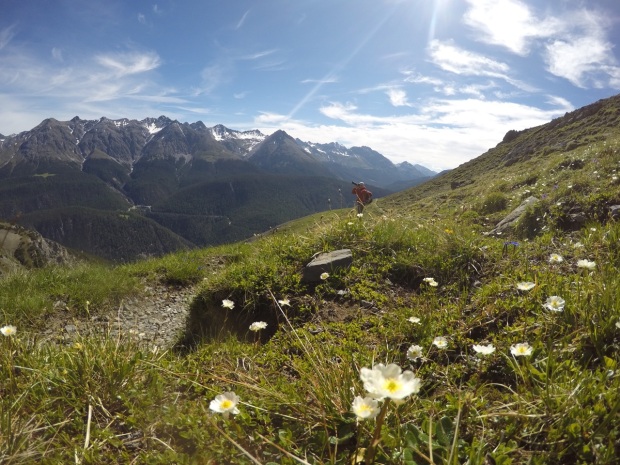 Haha, I lied! But this one has mountains too. 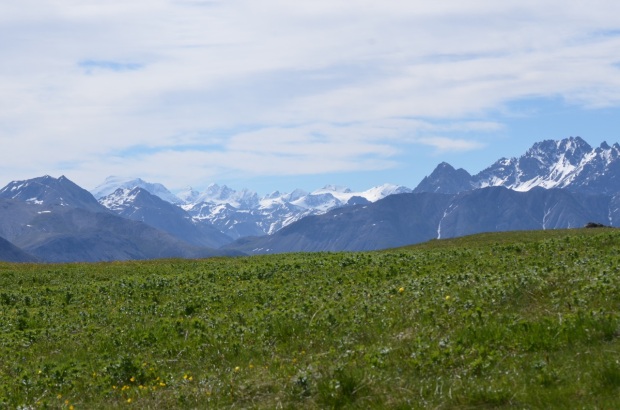 The view on the way down

On the way down we crossed a small area of snow that is still lying on the path. It wasn’t anything but Anna took a photo and I think it looks cool, so here it is. 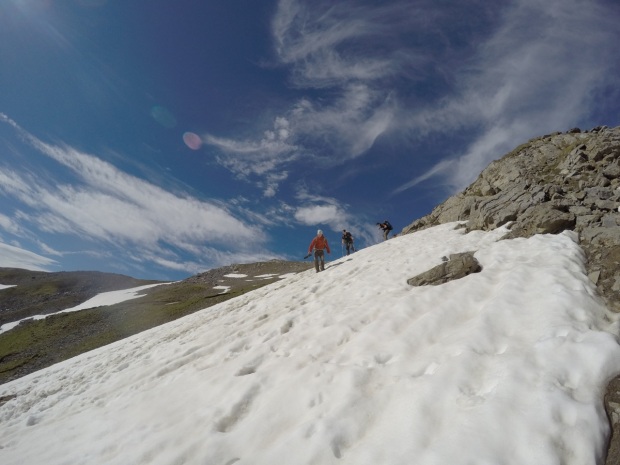 A little while later we could see the turquoise waters of Lake Spol in the floor of the next valley. 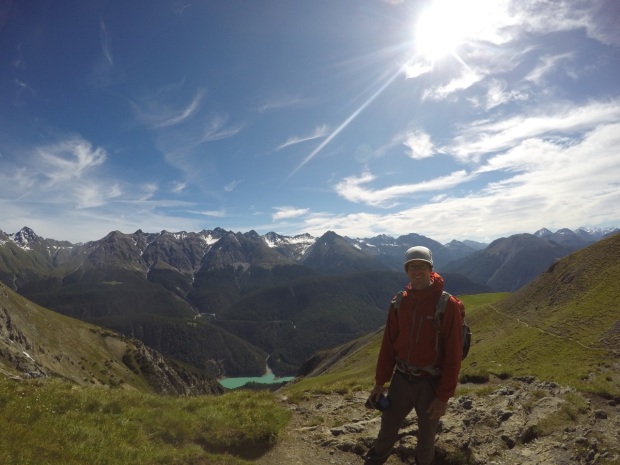 We headed down the long winding path towards the valley floor until we found ourselves in a wooded meadow close to one of the exits from the trail. It was only 1 pm though, so we decided to add another few kilometres onto our walk. The next trail followed the valley floor upriver, so we went up and down, crossing the small valleys created by the tributaries of the main river. Anna was teaching me German as we went, and the afternoon passed quickly. Eventually we got to a bridge and crossed, at which point we reached the sting in the tail, a 200 m climb to reach a ridge, which we would cross to get to the road. It was hard work after such an early start, but the woods were beautiful, mixed pine and larch.

Finally we crested the ridge and made our way down to the road. We waited a little while for the bus and took the 20 minute (and 16 franc!) drive back to Zernez. We came back from the campsite showers to find a note from Ruedi in one of our hiking boots. It says to be at the office at 7.30 am tomorrow if we want to help out with some more fieldwork. Can’t wait!

3 thoughts on “Over the Murter saddle”