Today we had a look at the genesis of a really interesting project. It’s all about ants. There are loads of massive anthills in the National Park, created by the unassuming wood ant. Just for accuracy there are six species of wood ant in the park, but I have no idea which ones we were looking at!

The ants create trails across the ground in the park, and they also climb the trees. It’s known that they prefer to climb the taller trees, and that they milk the aphids that pierce the trees and suck out the sap. No-one knows why they always pick the taller trees, and no-one knows exactly what the ants do while they’re up there – it’s hard to record without disturbing them. So a team from the Swiss Federal Institute for Forest, Snow and Landscape Research WSL has decided to try to find out by using a drone to film the ants in the treetops. A company called Flyability that produces a special drone called “Gimball” wants to partner with the researchers to help prove their idea in the field.

Gimball is a drone that is encased in a carbon-fibre cage with flexible joins. A big problem with using drones for close contact work is the blades. These are usually made of carbon-fibre and rotate at very high velocity, meaning they tend to shatter on impact with other objects. Gimball’s rotor blades are safe within its cage though, so it can happily move around in enclosed spaces and bump into things without turning into a nail-bomb. Groovy! This makes it good for search and rescue work, and for inspections of pipework and other industrial equipment.

The purpose of today was to test out Gimball in the National Park to see if the idea flies. Sorry. We were picked up by Ruedi, and the three of us plus Michel and Stephano from Flyability, and Reudi’s son Florian (who is on school holidays) headed out to the park. There we met Martin and Anita who are researchers at WSL, and Thomas and Judith who have just finished their Masters projects and are taking on a summer internship working for WSL.

We all headed into the woods, enjoying the open spruce, pine and larch forest around us. We went to a spot Martin and Anita have previously worked at, and where ant-runs are well established. Michel and Stefano, step forward! Michel flew the drone, while Stefano operated the camera. There was a bit of setting up time, and then with a loud whirr, Gimball took to the skies. 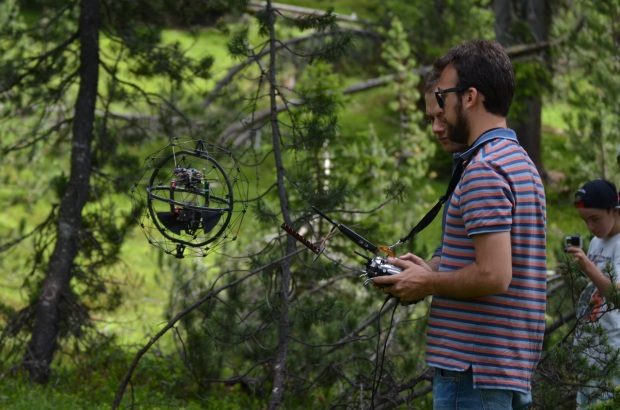 Unfortunately there was a bit more wind out in the park than in your average factory, so control of the drone proved tricky. It was fun to watch though, the drone whizzing around all over the place, Michel managing to get it under control for a few seconds before it randomly shot off across the woods again.

It kept us entertained for an hour or so before eventually getting stuck in a spruce tree. Luckily, Florian enthusiastically offered to climb the tree and poked Gimball into Reudi’s waiting arms with a stick.

After that, there was time for one more flight (which to be fair was quite controlled) before the last battery ran low and we drove back to the office to look at our footage.

It was actually pretty good; when Gimball had managed to stick close to a tree for a while we saw glorious HD footage of the bark. No ants though. We thought that when you watch the ants in person, it’s really the movement you see. They are pretty well camouflaged when they’re standing still. And with the movement of the camera and the cage it was pretty hard to distinguish from anything that might be moving on the tree.

Looking at the data

Ants are hard to see!

To prove it we headed out again to do some filming of ants moving on the trees while holding gimbal steady at ground level. Sure enough the ants showed up this time, showing that it was the movement of the camera and the cage spoiling the view.

While we were out, Ruedi pointed out an ant hill that is know to be over 100 years old, as it shows up in photos from when the park was established in 1914.

Armed with the new knowledge, the researchers and the Flyability team went back to their hotel to discuss ants and cameras over dinner, while Reudi drove us back to the campsite, remarking, “Well, now you know what real research looks like. It doesn’t work and you have to go back and think about it again”. True enough. Tomorrow we’re going to go out with Reudi and the WSL guys to find new spots that would be good to film, track and generally mess about with ants. Good excuse for another walk in the National Park!