July 5, 2015July 5, 2015
After yesterday’s exertions we got up at 7, way later than we we should have done! We left the campsite and followed the Hinterrhein north to where it meets the Vorderrhein and becomes the unadulterated, undiluted Rhein at  Reichenau. We followed a cycle path, and it was great to be out of the traffic, although there was the odd bit of agricultural equipment to avoid. The path wound up and down the valley on one side of the river, with occasional enticing views of the opal blue water.

A wobbly bridge over the Hinterrhein 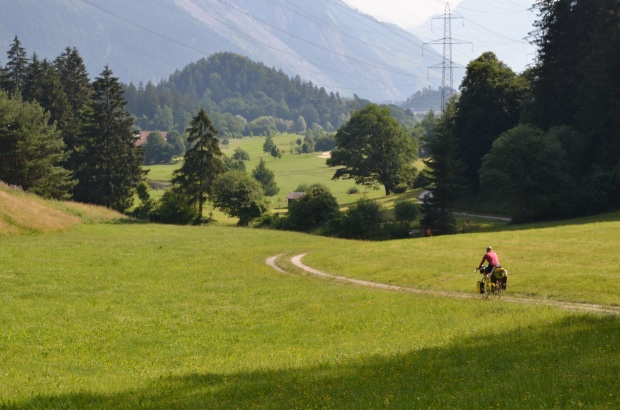 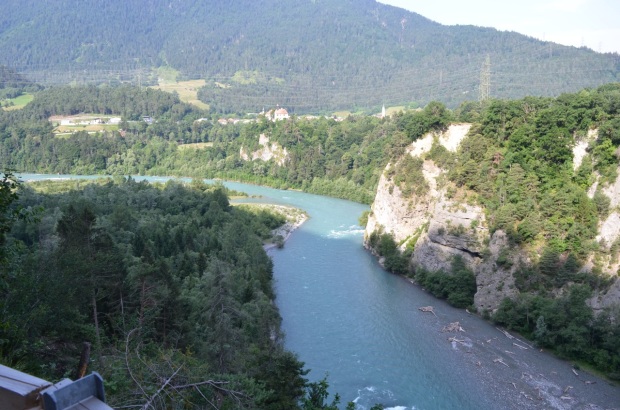 Chur is apparently the oldest town in Switzerland. We found the old town and had lunch on the steps of a church when we couldn’t find a shady bench. A cheeky sparrow made off with its own body weight in cheese rind. We felt that Chur maybe had more to offer than our tired, hot brains could appreciate!

The detour into Chur meant more delay, and by the time we got going again it was 12, and we’d only covered 20 km. We carried on along old roads and cycle paths,  sometimes alongside the Rhein, sometimes quite far away, but always blissfully clear of the main road. By 1pm however, things had got too hot, and we sought respite on a shady bench under a tree. 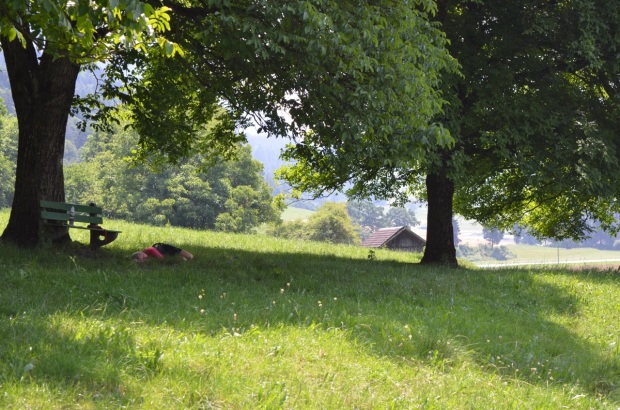 Nap over, Anna spotted a campsite just 1.5 km away, so we slogged over there, hot, moody and in need of a shower. Once we turned up we splurged our stuff over about three pitches and the campsite manager was obliged to tell us off because another couple wanted to park their massive caravan in the shade. We reorganised our stuff, obviously making sure we remained out of the sunshine. Pah, caravanners!

When we went to pay, the manager apologised for asking us to sort our stuff out, and from then on was super nice.He undercharging for our tent, bending the rules slightly (very un-Germanic apparently) to let us have wifi and chatting with us about music.
After dinner we were just getting ready for bed when another cycle-tourer turned up. He’s done a circular route today, doing both the Albulapass, which we did yesterday AND the Flüelepass near to Zernez. He’s done almost 3,000 metres of climbing today, and about 140 km! He’s on a three-day tour from his home on the German side of Lake Constance, and he’s certainly getting his money’s worth! Oh, did I mention he’s a grandfather? Made us feel pretty weedy!
We got into the tent and it was immediately too hot for Anna. After a while she went outside with no sleeping bag. Hope she survives the mozzies!
– Dave