Aaaaah, such a long lie-in this morning! We heard Huygen get up at 6 am and went back to sleep without any guilt whatsoever! By the time we got up it was almost 9, and Emma had been out walking the dog already. I did feel slight guilt about that but never mind.

We had a really good morning chatting while we slowly got our stuff together ready to go. Emma made delicious pancakes, which we ate with yoghurt and fresh fruit. An amazing treat after having cereal every day for the last few months! By the time we were ready to go it was around 12. We said goodbye to Emma and set off. Into the drizzle.

The cycling today was easy. The Dutch have really got it nailed with cycle routes. I knew that on a theoretical level, but actually using the routes every day makes you realise how much better it is than anywhere else we’ve cycled. It feels like they really thought about cyclists when they built the roads, instead of cyclists being an afterthought. The British government could definitely learn something here!

Hm, we must be in the Netherlands

The rain was on and off all day, so annoying to cycle in! It was drizzle, otherwise know as “wee wet rain”. It comes in from the side, the front, the back and sometimes even from underneath! How does that happen?? When it’s raining, it’s awful. Then the rain stops and you get too hot in your waterproofs, and you think, hm, maybe the rain wasn’t so bad. Then it starts raining again and you remember how much it sucks. 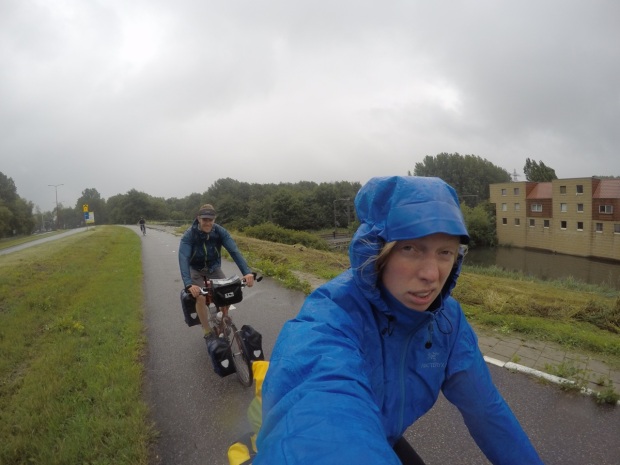 We stopped for lunch in a little park with a pond and a fountain. There were three groups of people fishing in the pond. One group was all kids. Is fishing fashionable with the kids now? They were getting rained on and everything. Very confusing. No-one caught anything. BECAUSE IT WAS A TINY ORNAMENTAL POND MAYBE?!

We went to an outdoor store for some camping gas. Anna invested in an inflatable pillow to go underneath her normal pillow. That’s right, Anna goes camping with two pillows now. I think she’s well on track to buy a caravan in the next few years.

As we got near the campsite for this evening we heard someone ringing a bike bell behind us. It turned out to be a lady who’d seen all our stuff and wanted to offer us a camping spot on her farm tonight. She has done a few tours herself and said that she always offers a space to people she sees riding past. We declined her kind offer because we were excited to check out the campsite we were going to, and because we didn’t want to leave ourselves with a longer day tomorrow. It was really good to be asked though! Lots of people are nice.

We turned off the main road and got onto a little single track by a canal. We followed it for a mile or so, and eventually saw a sign advertising Nature camping (it’s not the same as Naturist camping!). We went in and were shown to a nice quiet spot on the edge of some fields by an elderly farmer on a bike. The price was €12.50! That’s the cheapest of all except Portugal. What’s going on!? We were worried the showers would be cold, but no, they were steaming hot, and there was even wifi. Luxury on a budget.

The campsite is cool, it’s a working farm, but it looks like they invite people to have quite a good look around in all the barns and things, and see how the animals are kept and how everything works. We also spotted some canoes for hire; sadly we didn’t have the time or energy to go up and down the canal any more than we already have. 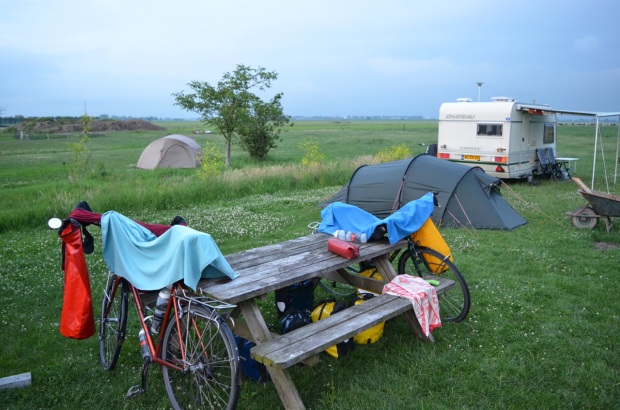 Camping in a field 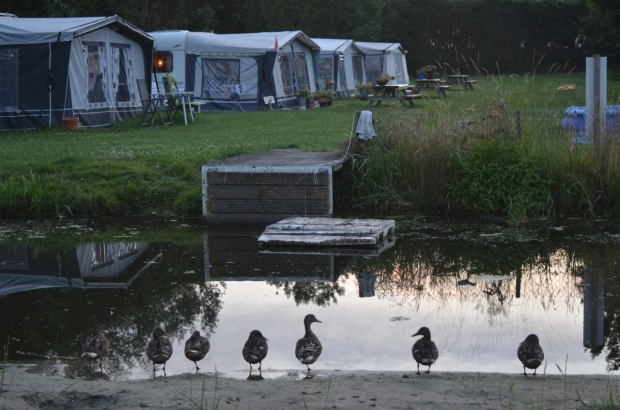 Tomorrow we will go to another of the Nature campsites near the coast. It’s quite close to Rotterdam, which means we’ll be able to see the end of the Rhine, even though we didn’t cycle all the way along it!