We’ve been over to the house every weekend for the last month. And Dave has been working remotely as an environmental consultant 3 days a week whist we’re at Richard and Suzanne’s. So it’s been a whirl-wind of driving, carrying, packing and unpacking, working at the house and trying to make progress here without Dave. I have to say, I’m bloody knackered, and I’m sure Dave is too. It will be nice to be in one place for a while once we get back from a week in Blighty at the end of March.

Our wood delivery was due on a Friday three weeks ago and we started the day by carrying some stuff up to the house in the morning mist. 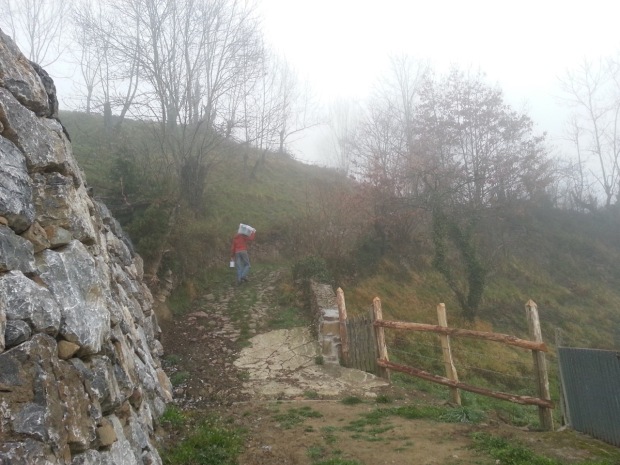 The start of the track to our village

Then the wood arrived and we spent half a day carrying it into the village with Tarje. Chestnut is so heavy! Tarje had already done this chore several times on his own, so could carry a good bundle. I was struggling along with three boards on my bruised shoulders and my muscles were definitely feeling it by the afternoon. One of our lovely neighbours Tivo was passing when the wood arrived and lent us a rope to drag the largest of the beams that couldn’t be carried easily. The couple that has the field above us were passing on their quad and stopped to chat. After exchanging pleasantries, they enquired “Are you accustomed to working?” Having seen the two of them, easily in their 60’s, shovelling cow shit and tending to the sheep every day, I couldn’t very well tell them that I was accustomed to working. “Well I used to have an office job” I told them, and they puffed out their cheeks, knowing I had my work cut out. 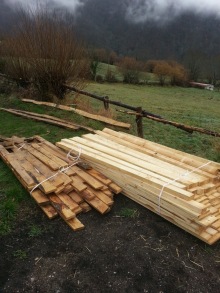 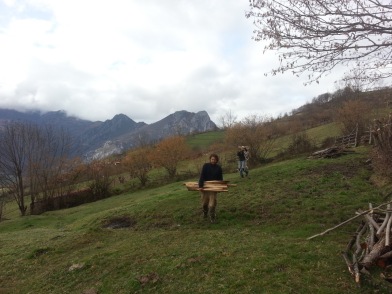 Carrying it over the field

The rest of the weekend was mostly spent digging post holes. We also got over half of the wood treated and I started preparing a garden (so much for being patient until April!). 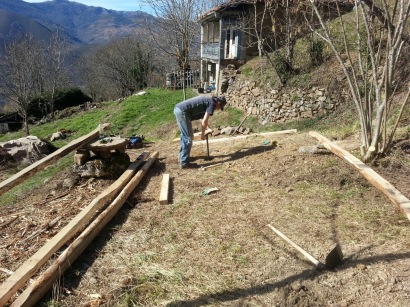 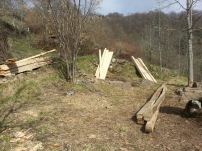 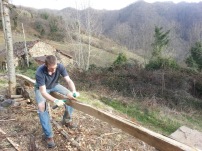 Shaving off the bark 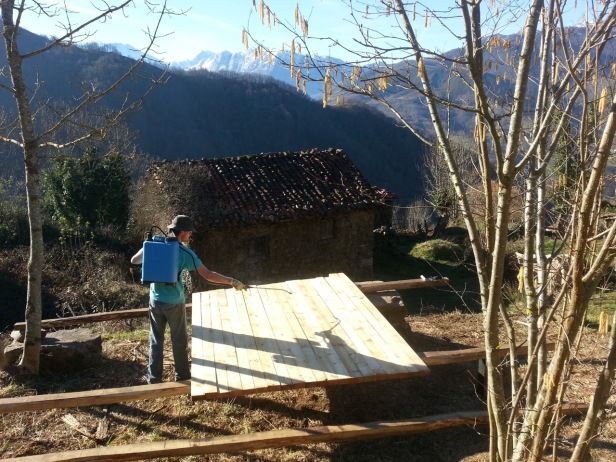 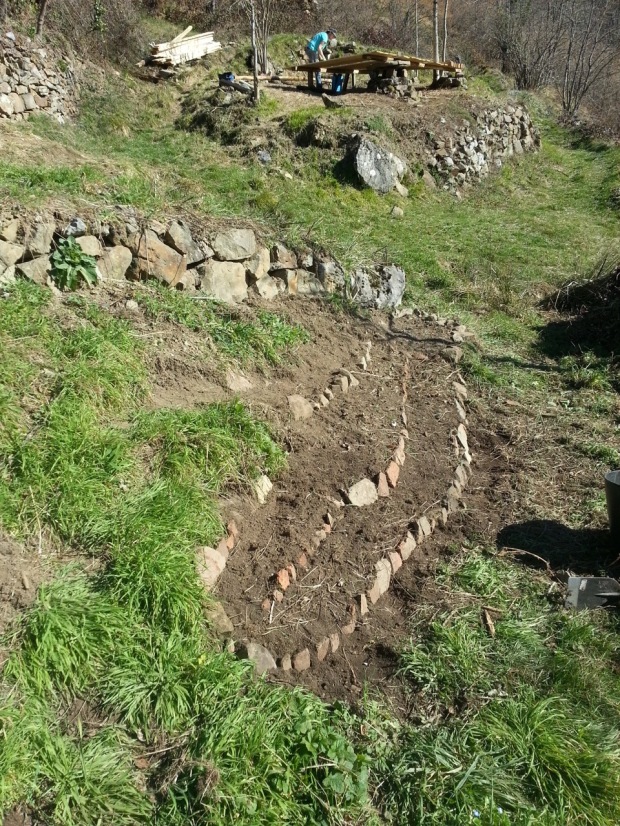 Luckily the weather cleared up and it was so hot that I enjoyed a garden hose shower in the afternoon sun without getting goosebumps. Bliss.

The weekend after that one, more post holes followed and we started to test out two of the beams on the posts and rocks. Oh dear. Not only were they not level with each other, they weren’t even level with themselves! Posts had to have their tops sawn off, rocks had to be lifted again to dig them into the ground further and the top slope had to be dug out where the ground was too high to allow the beam to lay flat. So Dave mostly got on with that stuff whilst I started planting a herb garden after our trip to the garden centre.

By the end of the day, his determination rewarded him with being able to screw down two of the three big beams and attach the joists on one side! It felt like real progress to get the drill out and start fixing it together. 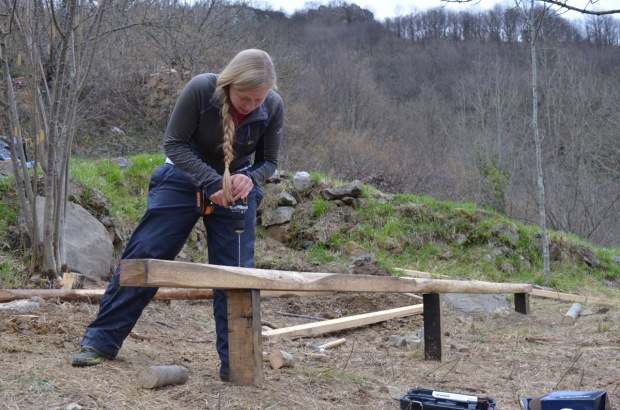 Fixing down the middle beam

Sunday was our first anniversary! We went for a nice dinner on Saturday night then spent Sunday being tourists in our local area, which was wonderful.  We went to see the hermitage, whose crosses on the rocky outcrop can be seen from our field. We went to visit one of the oldest yew trees in Spain, estimated to be at least 1000 years old. And we had lunch at a famous middle-of-nowhere restaurant, which was delicious albeit decidedly un-vegan. 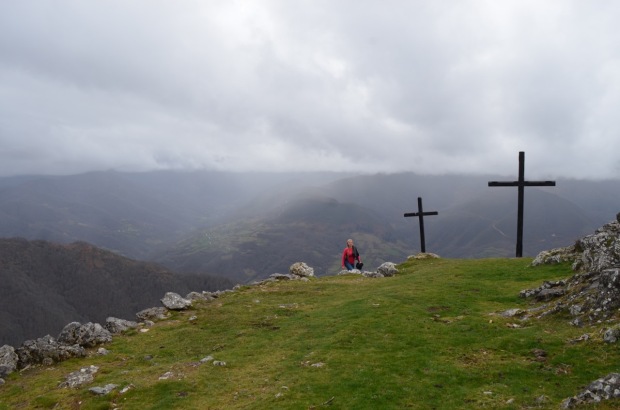 Walking up to the hermitage 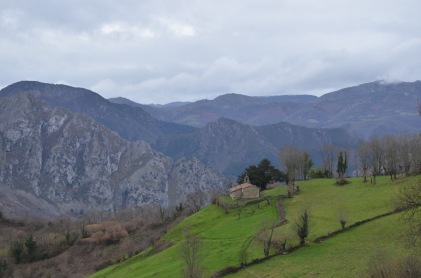 Yew with a view 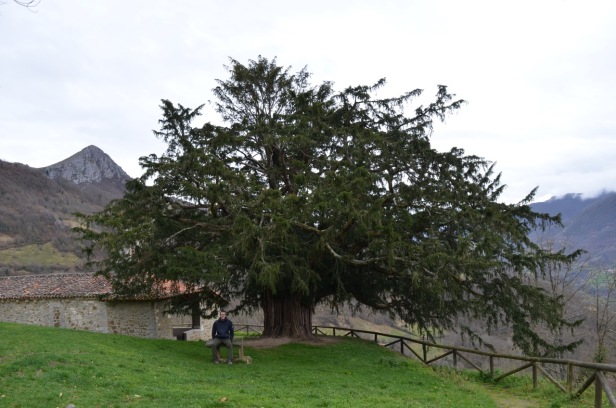 Dave under the yew

We’re spending this weekend at the house again with view to getting the platform finished (maybe) before heading to the UK for a week, spending a week at Richard and Suzanne’s, then moving to be at the new place all the time!