After all that snow, the weather turned and we had one day of beautiful sunshine to admire the glistening views before the clouds hunkered down and a warm front set about melting it all with rain. We escaped the worst of the initial melt by heading over to visit Richard and Suzanne in Cantabria for a few days and by the time we returned there were only remnants of snow around. Everything is now very very wet as the snowmelt and rain cascade down the fields and paths. 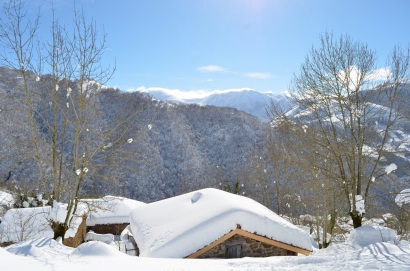 The destroyer of unspoiled snow

Dave enjoyed spending a day digging out little drainage channels all around the house and across the muddy paths in an attempt to make walking around slightly easier. It worked really well on the house, which had flooded again in the basement but now it seems to have dried out. The paths are harder to sort out and I think we’ll eventually have to dig proper drainage along all of them, but that’s a job for people who have a house to live in.

I’ve spent five days pointing the house with Dave helping out when he’s not been working. I’m surprised how much I’ve got done actually and it has inspired me to crack on and finish the lot. 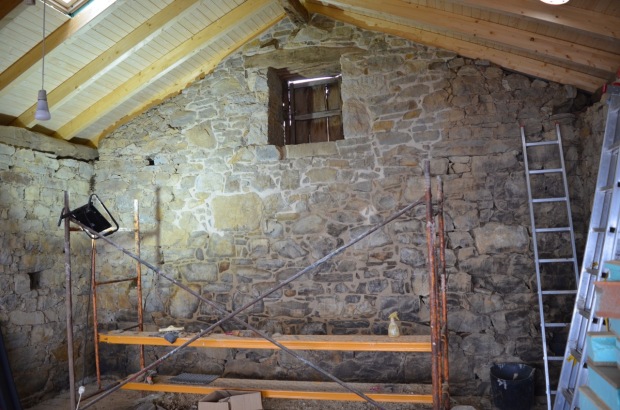 The back wall has a large section finished

Occasionally to get away from the wall I’ve been collecting and chopping firewood from snow-toppled trees and branches. I’ve also been pottering in the garden a few times, seeing the peas, garlic and onions doing well in spite of the weather. I’ve also got a good pile of manure ready for spring thanks to some horses that escaped from somewhere and came to hang out in the garden for a few days. 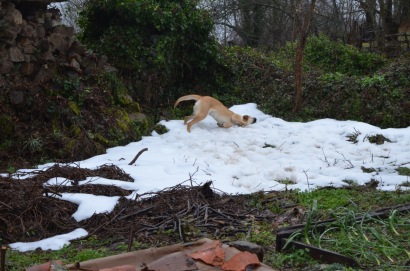 We have spent some time doing a bit of project management because I’ve been watching Grand Designs and that seems to be a think worth spending time on. We’ve been thinking about our off-grid plumbing and electrics systems. In terms of where we are on the house, that means thinking about where plug sockets, light switches and light fittings are going to go. Dave had romantic ideas about hiding the wiring behind the pointing, wiggling wires between rocks and putting mortar on top, but it’s quite hard to find places where wires can fit. In the end we decided that most of the electrics will go on new bits of wall and in the mezzanine floor, which should be easier. And I’m determined to investigate getting a micro-hydro system to supplement the solar panels in winter when they generate the least.

Away from the house, last week I did my first English class at the local primary school. The kids already have proper classes with a proper teacher so this was more like extra curricular activities in English. There were about 25 kids aged 4 to 11. Getting them to do stuff was like trying to herd cats. Some of them were keen to learn, others not so much and of course it’s hard to do stuff to suit every age group. It was an interesting experience and it’s given me food for thought before the next one in two weeks.

So things are going pretty well at the moment, although the miserable weather has been getting me down. The last few days I have been taking a break from the dark house to go for walks in the woods and cook some good food. But this morning we woke to frosty ground from clear skies overnight and the sun has come up to reveal blue skies and snow-topped peaks, which is absolutely glorious.

One thought on “The big melt”