Things are going relatively well. The landscaping got finished in early June and I even managed to sow some of it with grass and clover, which are coming up nicely.  For the tree nursery, I made a table for the seed trays and put up a shade so they wouldn’t have to be watered as much. Lots of seedlings popped up and I have loads of teeny tiny trees – so exciting! The only problem is that when I try to move one little tree from its seed tray to a slightly bigger pot, it dies. I’ve only got so many more goes before I run out of trees to try this on. But at least now I know those nitrogen fixing trees are easy to grow, so I can always try them again.

Cute little trees – but how to pot them on without them dying?

The herbs I planted from seed are coming up nicely – some in trays and pots and others were sown straight into the bed. We should have a pretty good herb garden going soon.

Basil seedlings in the foreground

One fine day we went up the mountain with Omar to check on his cows with him. It was beautiful up top and we enjoyed the views and the company. 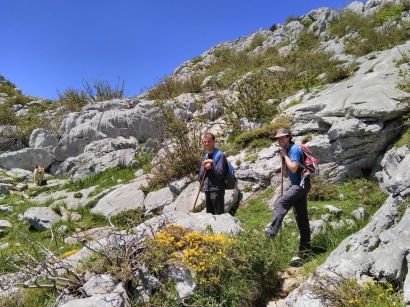 Returning through a rocky section

Ciriaco chilling on the mountain

The kitchen window is a project still in progress. It was scary at first taking rocks out but we got the hang of it and propped up everything above the hole. Then Dave read up on how to do it properly and decided to put in some supports above where the lintels would go. That was a great thing to do and made the job way easier. But as usual, what I thought would take a few days has gone on for weeks in amongst other jobs (and still isn’t finished!).

Dave prepped the four large wooden lintels until he was happy with their smooth, shiny, oiled finish. We took rocks out of the wall by chipping at the mortar and levering them out, trying to prop up the ones above that we wanted to keep in. Before the lintels could go in, the sides of the window they would rest on had to be built up. On one side that didn’t take too long, but the other side went on for days. Dave did most of it in the end, cutting rocks with a big angle grinder, finding other rocks to fit into the gaps on top.

Then when we had enough space to put in the two inside lintels, Dave and I measured them up and mortared them in place. After that, more rocks got taken out until there was enough space for the two outside lintels. Dave, Naomi and I measured them up then Dave went back to his desk job and left Naomi and I to put them in. This proved more difficult without the wooden chock we’d used to rest them on in the rest run. The outside one (which is slightly proud of the wall) kept falling out of its place and we had to cut little wedge rocks and balance the whole thing in there, mortar it in place and hope it didn’t move until the mortar set. It did slightly come away from the next lintel, leaving a small gap, but the lintels are all beautifully lined up, so I’m still happy with the outcome. 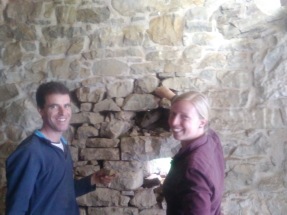 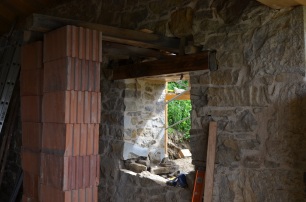 Still being propped up at the moment 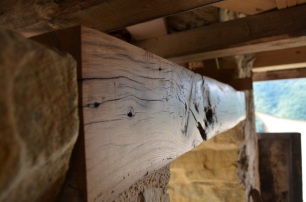 Once the weather warmed up in mid June, the garden started to take off. We had one week of summer weather and although it’s back to its misty, stormy ways, it’s not as cold any more. The tomatoes and pumpkins are growing by the day and there are more peas than I can eat. I’ve got parsnips, carrots, ocas, potatoes, beetroot and nasturtiums all going well. The broad beans have been unhappy again this year. Last year it was too dry and they got covered in ants farming aphids. This year has been too wet and they’ve got some kind of fungus and have made almost no pods. On the plus side, we harvested 50 bulbs of garlic, which are drying in the attic and planted that bed up with amaranths that I had been growing in trays ready to go straight in.

Pumpkins making a bid for freedom 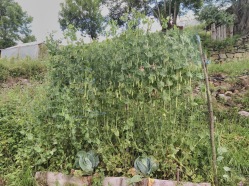 As well as my plants growing like mad, all the plants we’d rather not have around are growing like mad too. Omar and I have been clearing around the garden, shower platform, tent platform, greenhouse, paths, everywhere that was over-run. We are keeping on top of it but the buggers keep growing back. I left a few nice patches of bramble flowers though, because we might as well get some tasty blackberries out of the bastards.

For the summer solstice weekend, I went to the beach with friends Nik and Ellie. On the Saturday, Ellie and I went to a course about using wild plants for food and medicine, which was very interesting. We came away with new knowledge and enthusiasm as well as some jars of moisturizer and lip balm that we all made during the class. It was utterly exhausting learning new stuff in a new language though and by the end of the day when we drove to the beach, I was desperate to just sit and look at the sea. It didn’t disappoint. The long, sandy cove was almost empty of the day’s beach-goers by the time we got there and we sat and ate packed dinner and drank wine as the sun set. Then we set up our tents and crawled in under the moonlight. The next morning I got up before the sun and had the whole beach to myself for a sunrise swim, which was exactly what I needed. During the day it got busy but we enjoyed the sunshine and the waves before heading off to another beach in the evening to have dinner and pitch up with a view of the fading sky reflecting off the waves. It was a restorative weekend.

Plants we learned to identify

This part of the beach was less crowded

After that weekend I went to collect our new volunteer Naomi. She stayed for a week and was just brilliant. She helped me with the window, lots of pointing, weeding and we also built a bench. The bench is in the same rustic style as the one that was already at the house when we arrived, but it’s a more comfortable, stable, improved version made from salvaged wood. Lots of trees fell into the paths over winter, so there are stumps galore that were just perfect for our bench legs. And we found a big plank of wood rotting by a path in the village, so Naomi sanded that down and we chopped it in half to double it up for a comfy seat. The result is a good-looking bench of perfect height that’s very comfy to sit on and will never fall over (those tree stump legs make it very heavy indeed). 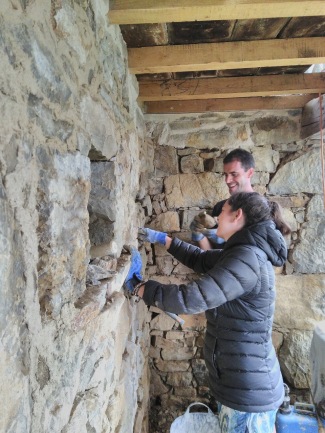 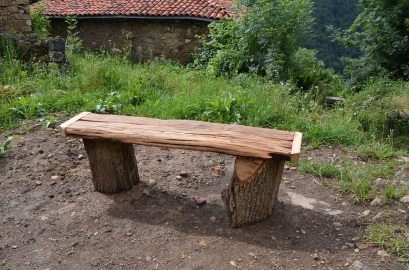 July arrived in style. I woke up to see clouds spilling in over the mountains from all sides but with blue skies above. The sun came up and shone on the tumbling mist, lit up the deep green canopy of the forest with its morning glow and brightened up the red roofs in the village. It was like a time-lapse video in a nature documentary. The weather has been warm lately but we’ve had a lot of cloud and thunderstorms. So even though it doesn’t particularly feel like summer and the farmers are grumbling because it’s not dry enough to cut the hay, I’m still delighting in being in such a wonderful part of the world. 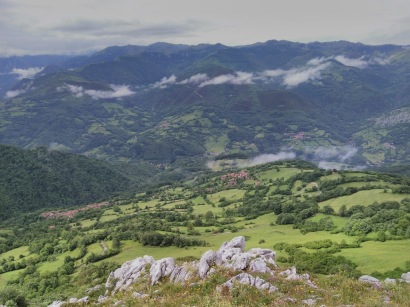 View from the mountain 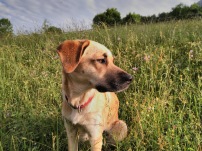 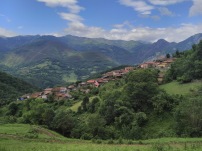 View on my morning dog walk

Sunrise in the field