May has been glorious. Long, sunny days and a night-time chill to remind you summer isn’t here quite yet. It’s the time of wildflowers and butterflies. Everything is growing like crazy and the forest has filled out into a dense green carpet. 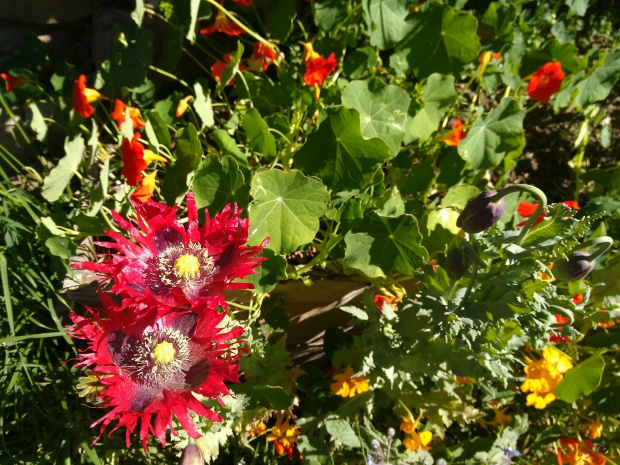 After all the good work that’s been going on the house, I was actually getting a bit behind on the garden! Unbelievable. The first week of May I spent weeding, sowing, planting out and collecting my first harvests. There are spring onions, rapini, radishes, lettuces, pea shoots and kale leaves. Lots of tasty stir-fries!

The beds that were already prepared are filling up quick, but I’m trying to keep it reigned in for a small garden again this year. There’s a lot of other stuff going on and I know it is better to keep it small and organised. I was certainly glad of it last summer when I had a limited space to water and weed, then less produce to deal with in the autumn.

We had another Permaculture Roundup, preparing a huge area of garden for Zoe, Roberto and Jorge. They grow an enormous amount of their own food and usually have enough to sell some in the summer too. It was a beautiful day doing some digging then hanging out for a long lunch out in the sunshine with friends and mountains all around.

Dave and I got around to putting in the last post in the front wall of the house. It took the best part of a day but went smoothly.

We spent a weekend getting the windowsill prepared for the lounge window. The edges had to be made nice by grinding some of the larger rocks. The base had to be made flat, the sides built up and the pointing finished all around.

Once prepared, we put in our order for a cut-to-measure piece of stone for the windowsill and another to go under the wood burning stove. I went to pick them up in the car – the big one just about squeezed in the boot! Then they got carried in with help from Omar, Tarje and Signe.

The big stone that will go under the stove has to wait for now, but Dave and I got to work putting the windowsill in one weekend. It went very well and looks great! Just missing the glass now.

There was a week of summer-like weather forecast, so I took a risk and sowed ALL of my summer veggies in the second week of May. Trays of sweetcorn, pumpkins, tomatoes, courgettes, runner beans, French beans, basil and amaranths all sat in the greenhouse hoping to come up before the clouds and rain returned. The risk paid off. Even though the subsequent week of cold rain slowed everything down, the only casualties were a few cucumber seedlings.

The bags of seeds that had been in the fridge came out for sowing. The golden currants and wintergreen barberry had already germinated in the fridge! Everything has been potted up and hopefully will start sprouting.

Dave and I spent a weekend finishing the top edge of the front wall of the house. This is where we’re going to install glass doors and windows. The big new beam that got put in when the roof was being re-done is very much not straight. So we cut two wedge shaped pieces to give the doors and windows square frames to be mounted into.

Catharina came back for a long weekend. She’s still looking for land around here but between field trips she did some work on the house with me and Omar. We demolished the old window frame in the kitchen window and started rebuilding the rock surround. We also finally finished the rock steps in the garden.

On Sunday we had a lovely sunny hike up the mountain. And on Tuesday we went to see another piece of land that’s for sale. She’s seen a few different options now, I’ll be excited to find out whether she decides to go for any of them!

This month definitely hasn’t been as productive as the last few as far as the house goes. And suddenly June is here and the summer madness begins. Dave has just left for the UK and I’m heading out in a week too. It’s going to be a challenge to keep progress going on the house – especially with Dave working full time until September! Wish me luck.