Well he didn’t turn up on the Thursday, but he did bring the machine in last thing on Friday and leave it here with the promise of starting on Monday. Sure enough, on Monday morning we walked around, chatted about what there was to do and he got going.

The field before digger works began

The first terrace at the top went really quick – he had it done in a day! Then he dug out the natural swimming pool in the back corner, a track to join the top terrace to the next one down, and started on the middle terrace on day 3. It took longer because he had to join the down-slope from the top terrace with the up-slope from the middle terrace. The lower terrace also took a while for the same reason. Then he had a track to make down to the house.

Whilst all this was going on, I was also preparing for the French drain around the house. I calculated we needed around 30 tonnes of gravel to back-fill the trench! I could order 25 tonnes to be delivered to the village carpark for 350 euros. But a big pile of gravel half a mile down the hill wasn’t much use without some assistance. We organised that three of the village farmers would come along with their tractors and trailers and the digger driver would scoop up the gravel to load them up and they could make their way up to the field. It sounded like a decent plan and thankfully the neighbouring farmer was on board for us to cross his field with all the tractors, otherwise there would be no way to bring it in.

The next week he got started around the house. A lot of soil had to be moved with nowhere in the immediate vicinity to put it, so a dumper truck and driver arrived with him. They motored along digging and dumping soil, pulling out trees and slowly freeing the back of the house.

Dave and I were quite busy too. The water pipe got snagged by the digger, so we got that sorted out. And to prepare for him to bring the digger around the front of the house, we removed all the pipes, cables and the gate that were in the way. When he came down, he only just fitted, nudging and chipping a few rocks in the field wall to make it through! Once on the far side, he tore down the rock wall and steps, set aside all the rocks and set about digging. He made himself a soil slope with the material he dug out and drove straight up it using the bucket for purchase to stop the machine tipping over! I could hardly watch.

It was stressful watching the house get un-earthed. The walls below the ground aren’t of the same quality as the ones above. And with every scoop of earth that came out, the banks around the back got steeper and higher. When he made it to the deepest part of the trench at the back left corner, he found some quite hard bedrock. He started chipping it out with the 800kg hammer drill, which went quite well. But upon scooping out the loose material, caught the bucket on a huge piece of bedrock that formed part of the wall of the house! The rock came out of the wall and the whole corner of the house slumped down – some rocks fell out the back and cracks appeared all the way up the sides pretty much to the roof.

We spent an hour filling in the big hole left by the piece of bedrock and some of the smaller holes off to the side. But we agreed that it needed to be cemented before he carried on. So he clocked off early and I went to buy sacks of sand and cement. 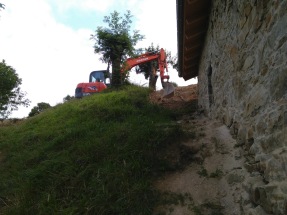 Starting to dig the house out 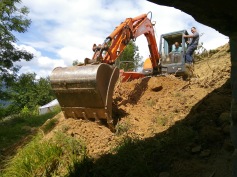 That afternoon we had some volunteers arrive. It was hot and sunny but Kasper and Elise kindly got straight to work mixing cement and helping pug up the walls. The next three days we spent every morning mixing bucket after bucket and getting the gaps filled in. By the weekend it looked a lot better. It was so hot on Saturday that we went down to the river in the afternoon to cool off. 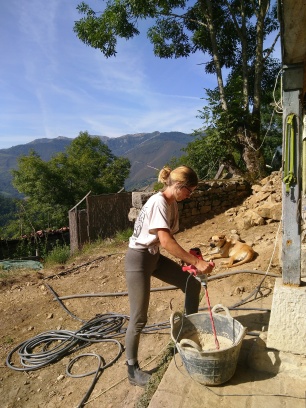 So much cement mixing

Taking down the wood store

Then on Sunday it rained with more rain forecast for Monday when the gravel was due to arrive. I managed to get the gravel, digger driver and tractors postponed until later further notice whilst we wait for the fields to dry out.

The whole week was wet with the week after forecast to be wet too! So we started some other jobs. We started clearing one of the paths that has the potential to provide us with decent access on foot, but required three days of Omar working with the chainsaw and us dragging branches out to be even slightly passable. There’s still work to be done.

We also started installing the beams for the sleeping loft. We got the big beam set in  place one morning, perfectly straight and level of course! And much quicker now that I know how to do it effectively. And we got one of the small beams set in position too, which was great.

Lifted the beam into position 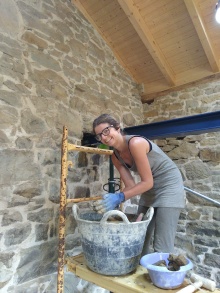 Pugging the beam in

My seeds finally arrived in the post one day. We started putting some coconut matting on one of the terrace slopes and sowed cover crop seeds in the wet weather. It’s only a small area of the field that could be done at the moment since the digger still needs to come back, but the seeds came up nicely so it was a job well done. 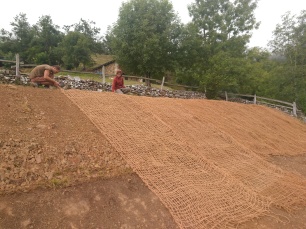 Laying out the matting

At the end of the month, Dave went off to the UK for his brother’s stag do, then I was away for a weekend with friends in Belgium and we had Dave’s sister and nephew here for a week as well. We went exploring in the woods and paddling in streams, and got a few little jobs done at the house. Kathleen helped me plant out some of the plants from my little nursery into the field, which was nice. I hope they do well! And we got the third and final metal beam in for the sleeping loft.

Putting stabilising plants in the bank

Getting the last beam up

Finally we have a dry forecast next week to get the earthworks finished. We can’t wait to have the house safely back in the hillside.