The tide of progress turned and we got a lot done this month, which I’m very glad about. The autumn weather we expect returned at the start of the month and it was glorious for a few weeks.

We had a group workday the first weekend of the month. Some friends bought a ruined mill that they want to restore, so we got together and everyone got in the river to dig out the silted channel. A few of us spent the day picking, washing and pressing apples for juice rather than digging. As always it was a delight to be at someone else’s project, in good company and eat good food. It took my mind off the stress of our house for the day and I felt much more relaxed afterwards, ready to tackle the earthworks once again.

Digging out the muddy channel 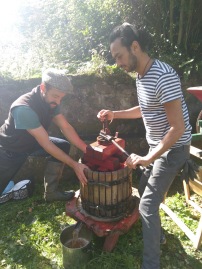 Having allowed September to pass us by without finishing the earthworks, I knew it was vital we get finished in October. Last year it snowed before Halloween!

It was dry when we got back from the UK (obviously we missed a great weather window whilst we were away, but I won’t dwell on that) and although the forecast was slightly mixed, it was unlikely we were going to get more certainty by waiting any longer. So on the first Friday of the month I ordered the gravel for Monday. The owner of the neighbouring field, the digger owner, the digger driver, the tractor drivers and the gravel delivery company were all on board. Then the digger broke down and couldn’t get here for Monday. But after phoning around, we were all set for Tuesday morning instead. Phew.

The gravel got dropped off in the car park and all the drivers turned up in their machines to get to work. It was a glorious day and the ground was dry. Even though it was a bit slow for the tractors to reverse along the track and open the backs of the trailers to dump the gravel by the house, with three of them in convoy it was all done in three hours. What a relief! 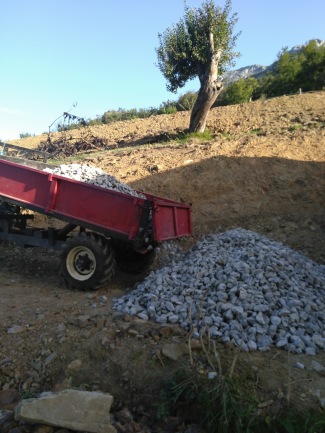 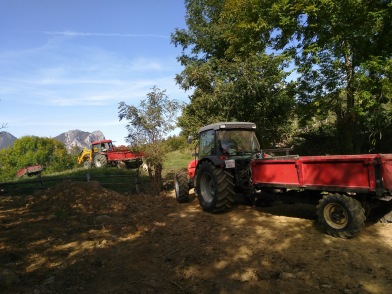 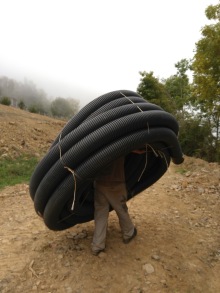 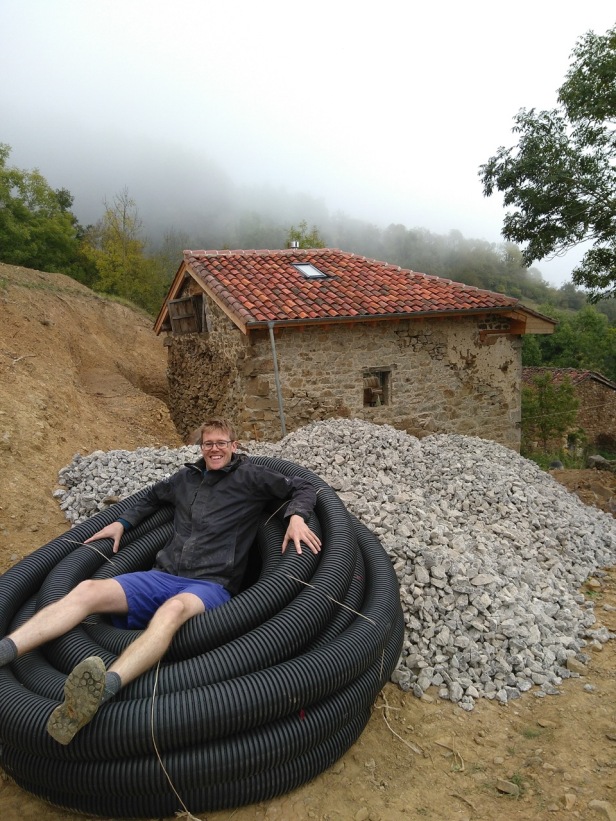 The next job was to finish digging the trench around the problematic back corner of the house. The driver used the enormous jackhammer like before except this time we left a protective section of rock around the corner of the house, so things went a lot more smoothly. After four hours of hammering, scooping and checking the level, the trench was complete! Another big sigh of relief. 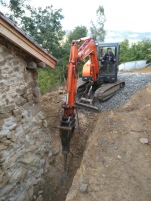 Working in the dark

Ready for the pipe 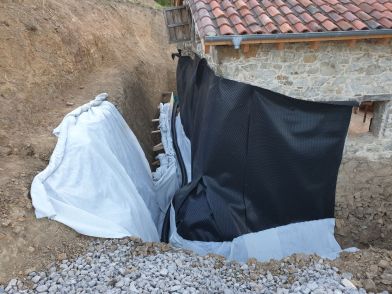 The next day we were all at the house at 8am getting started under a big LED work light. The pipe got laid in the trench and the first load of gravel went in! Once the level of the gravel came close to the height of the boards, soil got poured in the other side of the trench to the same level. Then the boards got pulled up and re-set and the whole thing repeated. It was pretty time consuming and by the end of the day we were all exhausted having filled about a third of the total trench.

We did two more long hard days of moving boards, pouring gravel and preparing the remaining sections of drain. After that, the house was safely back in the hill and we were all pleased to see two days of rain forecast so that we could have some time off to recover.

When the dry weather returned, things got moving again with the feeling like the end was in sight. The landscaping around the house got completed and I cut all the plastic and geotextile to ground level and we covered the textile in the remaining gravel. Drainage works completed! 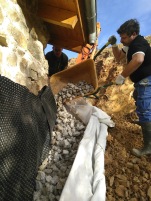 Working in the trench 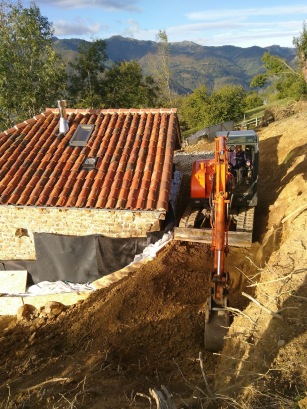 House back in the hill

Then all that remained were two long days for the digger driver doing finishing work in the field. We trenched in the communal water pipe and a ventilation pipe for our house. We moved the three big tree trunks to be chopped for firewood. And we placed the biggest of the rocks strategically around the field. Our favourite feature is the seating area by the natural swimming pool.

By the end we were very happy with everything. Of course now there is an enormous list of things to do! But we’ve got loads done with the digger and we are pleased with how it all turned out. The landscape around the house and across the whole field has been transformed. When the groundcover grows back it will be a thing of beauty upon which to grow our forest garden. 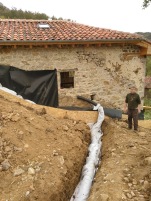 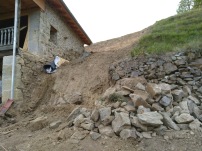 Still work to be done

The night after the digger finished it started raining and barely stopped for a week straight! Good timing to have got it all done. We had a weekend off and got caught up on household chores and made some good food.

When we went up to the house, we were delighted to find that the downstairs was still dry! That amount of rain before the drainage works would have led to a very wet floor. We never made it down as far as the bottom of the footings with the outside drain, so didn’t necessarily expect the downstairs to stay dry. We’ll see how it holds up against the more serious rains over the winter.

Some of the paths needed a bit of tweaking to get the water to run down in the right place. Lots of rocks, firewood and debris needed tidying up. And the gravel around the house needed some rearranging. We also did a good tidy-up in the house and got rid of a load of rubbish. I sowed some cover crop seeds in the field but it remains to be seen whether it’s too late in the season for them to succeed.

I hope that we can get some trees planted next month.

We finally mounted the metal bracket for the last of the sleeping loft beams. It was a tricky, time-sensitive operation because we put quick-drying resin in the holes to hold the bar in place. But thankfully all went well and it seems good and sturdy. Now we’re ready for the blacksmith to come and weld the beams in place, but we need to seek out a generator to borrow first – the welding machine can draw a lot more power than our inverter can give out!

Getting our glass doors for the front of the house has been stressful. Just putting the order together was a months-long process. In July we made sure the opening was correctly prepared and measured. Over August and September we were liaising with the manufacturer to find out everything we need to know, make decisions and get the order correct. And I found a company willing to transport them from the UK factory to us.

At the beginning of this month we finally got our order sent to the factory for production. They were collected for transport the other day and are on their way here right now! The driver is due to get here tonight, so we’ll be bringing them across the field in the dark. Fingers crossed that they arrive correct and in tact.

I’ve been enjoying harvesting and preserving again this month whenever I’ve had time. The store of drying hazelnuts has become quite substantial. We’ve got lots of crumble-ready apple chunks in the freezer. There are crates of pickle, relish, gherkins, tinned tomatoes, chutney and jam in the attic. I’ve even tried my hand at some batches of apple cider vinegar as well as sauerkraut. Dave has been baking lovely bread every few days.

The last of the courgettes have been picked out the garden. The dried beans have been gathered and shelled for seed and food. The tomato harvest has continued gloriously even as the plants are dying down for the winter. The pumpkins ripened nicely in the sunshine and as the weather turned cold and the vines died down, I collected them under cover to finish curing. We have started eating the first of them and they are delicious.

As the nights draw in at the end of the month and the weather has been mixed. We’ve been lighting the fire, eating pumpkin soup and baking apple crumble. I’m very glad we have got the grunt work for the year done now that winter is closing in and I’m into my last month of pregnancy. On the whole I’ve felt great and have been fine to get on with life mostly as usual. But it will be nice to have a calmer November and enjoy the last of our quiet time alone. I’m looking forward to putting the garden to bed for the winter and getting as much of the post-digger works done as possible before we take a few months off the house project and make the terrifying, exciting, life-changing transition into life as parents.

Pumpkins drying on the balcony

Curing pumpkins in the greenhouse

One thought on “Earthworks part 2”