We were up early this morning full of excitement to start the ride. Silvia had to work so we said goodbye to her first thing before having some breakfast and packing up. Once we were ready to go we said goodbye to Carlos and headed off. We were so lucky to meet Silvia and Carlos, they are  so kind and intelligent and full of enthusiasm for life. I hope we get to meet lots more people like them on our trip. We hope to meet up with them again on Sunday for some climbing, but only if the weather’s good so who knows.

Carlos – what a guy!

We set of North into some pretty heavy rain and had to go over two busy and STEEP road bridges. A great introduction to touring! The road out of town was pretty busy and the rain and spray kicking up off the road was not great. the tantalising views of the hills kept us going though and once we got out of town the traffic calmed down to a manageable level. The rain stopped just in time for our first break of the day after about 10 km. We found out from Silvia and Carlos that Spanish people have up to three lunches per day. This seems and admirable tradition, and we have decided to adopt it!

With the weather clearing we headed onwards; the road wound up and down over hills and valleys housing beautiful villages, impressive churches, lots of lovely woodland and  rolling acres of lush green pasture. I think we are getting the best of Northern Spain right now because there are wild flowers EVERYWHERE. We even saw a massive lily growing on the road verge. We also saw a huge bird of prey with a forked tail gliding over the road, we think it might have been a black kite. It’s stunning! 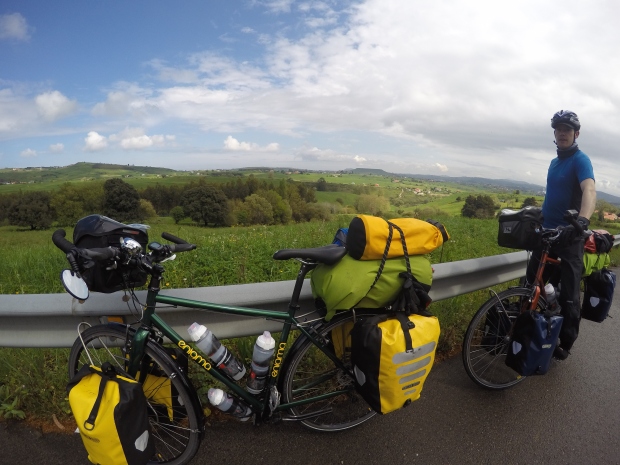 Some time after lunch number 2 (cheesy pasta) we were slogging up another hill when we stopped for some water. There were two ladies in a front garden discussing their flower beds. We said “Hola!” and the next thing we knew they were outside on the road offering us tea! Not going to lie, I really wanted a cup of tea at that moment, so we accepted and followed them up the drive. There were two gents pottering around in the garage, and at a word from the ladies they all jumped into action, a table was set up, chairs appeared and tea was brewed. Our hosts opted for martinis (we stuck to tea) and we had a 20 minute chat where we practised our very bad Spanish and they practised their pretty bad English. We managed to agree that the weather was bad and we may have brought it with us from England. We has to excuse ourselves as they started the second round of martinis, and they gave us a packet of biscuits to see us on our way. EVERYONE HERE IS SUPER NICE!

Pit stop with our new Amigos

After a couple more kilometres we got to our intended third lunch stop of Santilla Del Mar. This is a beautiful medieval town set in yet another gorgeous valley. We treated ourselves to lunch in a restaurant and an English lesson from a friendly waitress before having a little wander round. We would have liked to stay longer but the road was calling!

Re-fuelled we set off to cover the remaining 15 km to our stopping point of Comillas. We were getting pretty tired by this point so we were relieved to find there seemed to be a lot of downhill! We got into Comillas at 5 and found the campsite, picture perfect and right by the beach. The only problem was that it was shut. Crap. The gardener told us there was another site 5 km down the road. We had a conciliatory apple pastry and set off again. Happily it was pretty straightforward and we are now in a lovely campsite with showers and wifi (pretty luxury), contemplating 60 km into the mountains tomorrow and thinking we should probably go to bed!