We planned to go into the ATN office in Figueira de Castelo Rodrigo today. It’s a 15 km ride from the campsite, and we wanted to visit the castle on the hill above the town, so we decided to head off early and avoid the heat. I fell off the bike again on the gravel track from the campsite to Algodres, which I was delighted with. Luckily nothing was damaged except pride. I’m very proud though so it was pretty bad.

It was better once we got on the road and started making distance towards Figueira. There were some gentle hills, but it was easy with the bikes unloaded, and we sped along enjoying the cool bright morning. We saw a couple of hawks drifting on the wind, presumably looking for breakfast. We had already had breakfast, but when we went past an actual working bakery with a man outside loading the fresh bread into a van for delivery it was too much to resist. Lack of sleep and a crash had robbed me of the wee bit of Portuguese I have, so I communicated by speaking English and pointing. I’m not proud of this but there we go, it worked.

Back on the road with a warm loaf and a couple of natas in the pannier it was just a few more km to Figueira. We got into town and went straight through to get to the castle. They built it in a good place, the hill was really steep! I was glad that we weren’t fully loaded as we cranked out way up. The view from the top was pretty cool though! 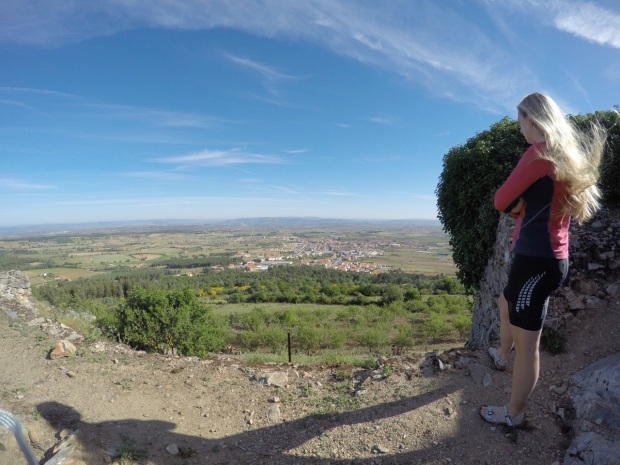 The castle is a ruin really, but some of the remaining walls are pretty high and you can get a good idea of the structure. The walls must be 8 ft thick in places, it was really impressive. It was closed when we arrived, but luckily the base of the walls is built into sloping rock, so we were able to climb up and get a look inside. Presumably it was a bit harder when the walls were full height and there were people shooting at you.

The ground outside the castle walls was covered in poppies enjoying the morning sunshine. Very poignant. 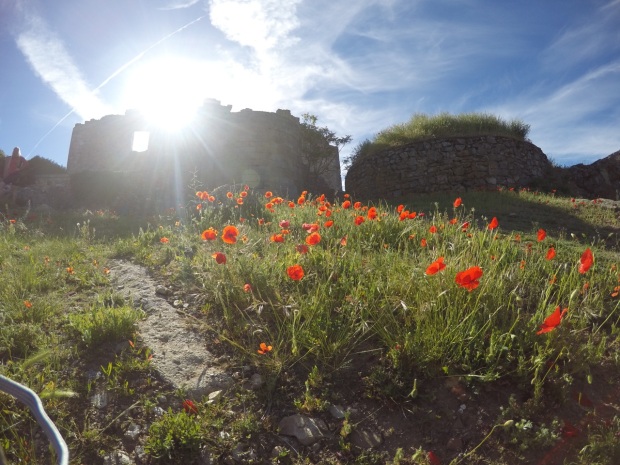 We went round the village, but it was early in the morning so nothing was open really. Can’t say much except it was pretty! 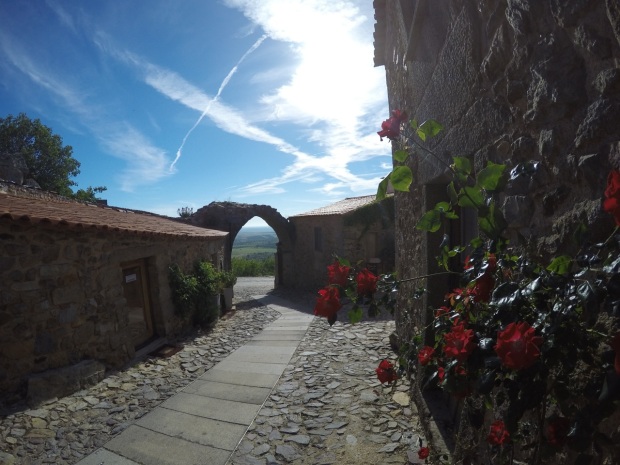 After that we tested our mettle going back down the hill as fast as possible and got into the office around 9.30. One of the good things about not getting paid or actually being employed is that no-one complains if you arrive late.

We haven’t had much proper work to do today. I proof read a sampling protocol for Tiago, but apart from that it’s been route planning and blogging. However, we did find out that we should be pretty busy for the next few days. There is a group of school kids visiting the reserve this week, and we are going to help the interns show them around the reserve, as well as doing some invasive algae removal and helping Tiago set up his  sampling sites. Should be a fun week!