Today we took a Sunday stroll through the Faia Brava reserve, heading south, crossing the river and going up the other side of the valley to the village of Cidadelhe, then back again.  It was a beautiful sunny day all day, as we’ve become used to, and it got pretty warm in the afternoon but it wasn’t unbearable (apparently it gets to 40 degrees here a lot in the summer – think we have to leave before then!).

The wildflowers are looking as amazing as ever, the insects are busying around and the birds tweeting away as usual.

On the way out, we came across the herd of Garrano horses. They are largely wild here and only taken in every few years to be branded and counted, but they didn’t seem to mind us being around and came pretty close without getting nervous. 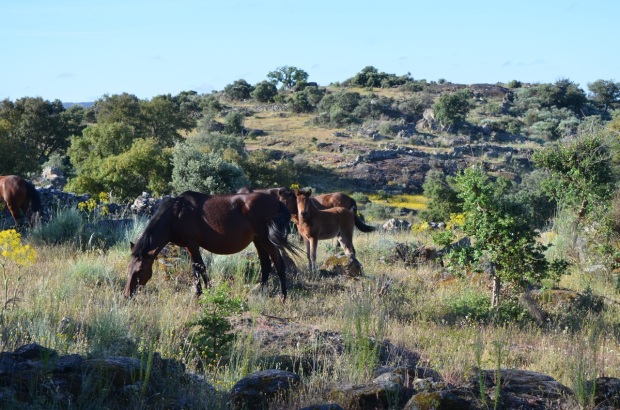 They walked right past us!

A little later, one of the wild maronesa cows ran across the track ahead of us with two calves in tow! They were a lot more wary than the horses and ran off into the bushes. They’re huge dark cows with big horns, the closest breed to the extinct Aurochs that used to occur here naturally. Apparently they don’t get herded and branded because it’s pretty much impossible to catch them! One died last year on the reserve but the vultures feasted on it before the cause of death could be established. The rest of them seem to be doing well now though. 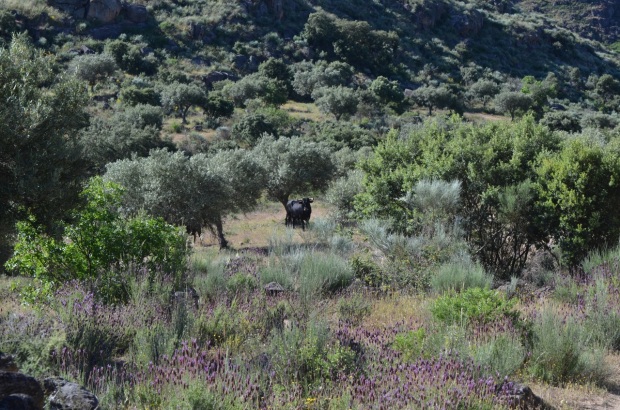 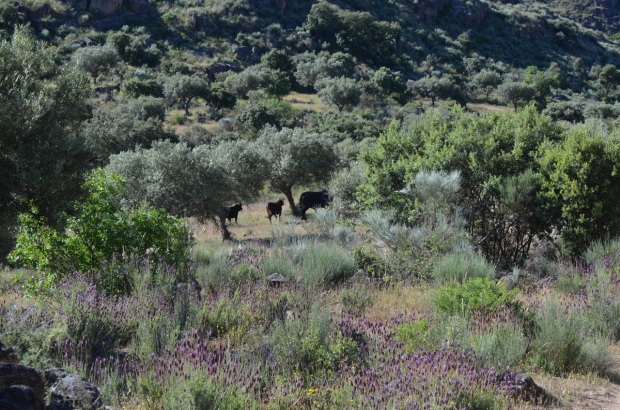 It was warming up when we met the road and wound down the switchbacks to Union Bridge to cross the Coa, so we stopped for a sandwich in the shade and watched the fishermen.  We also saw a terrapin in the water. Then we had to slog up the switchbacks on the other side before going back on the trail to the village.

Down to the Coa

We lost the trail for a bit and ended up doing a detour but made it to the village for lunch in the shade as a local man and woman tried to talk to us in Portuguese as we had to do a lot of “Desculpe, eu não entendo”. The man got a map out and showed us the way to the campsite, which was nice of him, then he waved us on our merry way back.

On our way out of the village we heard a bird in the trees making a ‘woob woob’ sound and we saw him with his crested head, which he bowed down to make the noise.

When we were almost back at camp, we came across one of the seasonal ponds that is coated in non-native algae. The frogs were enjoying themselves bobbing around on the floating plants and we sat and watched them for a bit. Ribbit! 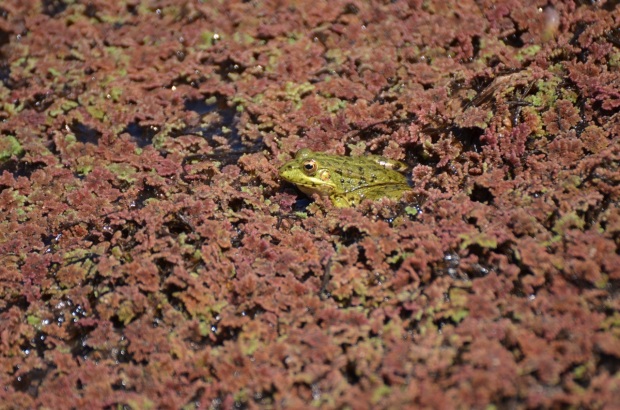 Dave’s hayfever was really bad after all that trail hiking!  In search of new medication tomorrow.  Other than that, we had a lovely relaxing evening and ate tasty egg fried rice for dinner before bed.  We even saw a lizard hanging out by the rocks at camp.

Up close and personal