We got up at 6 this morning and had sleepy breakfast with Johanna, packed the bikes and were on the road by 7. Amazing. We rode with Johanna to Figueira, Anna and I loaded down with our panniers once again, and she with a massive rucksack for work. We have cycled the route a few times now, so it was nice to be able to relax and just roll along enjoying the cool morning chatting and thinking about the fun times we’ve had in Faia Brava.

Anna and Johanna having a lovely time

As we got into Figueira we saw the Reserve’s two rural workers, Abel and Jose coming the other way. They gave us a toot and a wave, it was nice to see them once more as we were heading off for good. Once in Figueira we went to the famous (locally) Cafe Rosinho. Johanna got a coffee and sat down to wait for the office to open (it was only 8 am), and we bought our last genuinely Portuguese tarts (we crossed into Spain today). We said goodbye to Johanna and headed out onto the open road. It felt great to be exploring new territory again! Especially when the new territory turned out to be gentle rolling hills with a helpful tailwind thrown in!

We had 80 km to cover today in order to get to Ciudad Rodrigo in Spain. That’s equal to our longest day so far! Anna was confident we could do it, but I was a bit sceptical given our previous performances, and the fact we’ve just had 2 weeks off. Never let it be said however that I’m not up for a challenge, we pushed on in tight drafting formation, and apart for a quick stop to pick some wild cherries we had covered 20 km before having second breakfast (which was leftover tortilla, perfect cycling food) at 8.30.

We only stopped for 5 minutes before thrusting onwards once again, and blow me down if we didn’t find ourselves in Almeida, a tiny village with an improbably massive fortified wall around it 20 km down the road less than an hour later. Almeida has an interesting history, it is near the Spanish / Portuguese border, and when it was captured from the Moors in the 12th century by the second king of Portugal (brilliantly named Sancho the 1st), it was heavily fortified. Even though it’s a tiny place it was then re-fortified several times over the centuries – the current town wall is a massive 16-point star which could probably fit the village inside it about 10 times. We didn’t have any problems getting in though, and once we’d breached the defences we stopped there for a quick first lunch. We were delighted to see from our hilltop position that the next few kilometres looked gloriously downhill!

We were in such great form that we were soon at Vilar Formosa where we found the unguarded border with Spain. At least we thought it was unguarded, but as we shot through we saw the one guard chatting with a woman and her young daughter. We gave him a cheery “Viva Espana” as we went through and he gave us a wave back so presumably he was happy everything was in order.

After this we headed onto a main road that looked suspiciously like a motorway. We didn’t see any prohibitory signs though so we trusted to Google maps (you’d have thought we would have learned by now) and carried on. This time we were in luck, our road split off just before the actual motorway started. Once again we found our road ran parallel to the motorway at a distance of about 20 m for the next 30 km. It was glorious, if a waste of tarmac. Almost immediately we started seeing white storks by the side of the road again, these have been almost absent on the Portuguese side, we missed them! There was one we saw today that had built a huge nest on top of a small building. There was a chick in it, but the funny thing was there were also about 15 smaller birds who had moved in to the lower storeys of the nest. They all shot out as we rode past, it was a bit of a shock!

The afternoon was getting hot, and after another 17 km we pulled into Carpio de Azaba for a break. We managed to shelter from the sun on the steps of the village church. Good old God Delusion, it has a lot to answer for, but it did us a favour today! Obviously the pace was starting to tell, I wolfed down a cheese sandwich and was halfway through a mango jelly when Anna caught me at a low ebb. 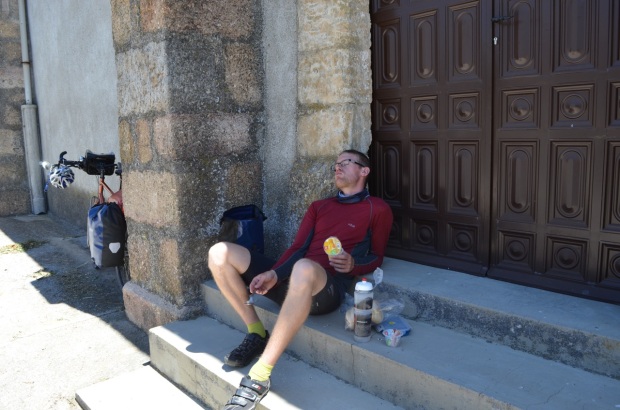 The gritty reality of cycle touring

A few minutes later I was back in the game and we set out to do our last 11 km to Ciudad Rodrigo. It was still very warm, but we had the nice fuzzy feeling of knowing there was an open campsite waiting for us so we were happy enough. As we rolled up to the turnoff for town we noticed a bit of fly-tipping by the roundabout. As we got higher we realised this was actually just the edge of a massive rubbish dump, which I think might be bigger than the actual town. There are strata that have started to become re-forested, but you can tell they are there by the way they rise from the rest of the landscape. A great introduction! Things improved as we got closer though, and spotted the grand old castle on the hill, nestling behind the huge town walls. Very impressive!

We found the campsite and got set up before heading up that steep steep hill into the old fortified town. We had just showered but we were wearing again by the time we got there! The old town was really cool, narrow cobbled streets winding between spacious plazas brimming with cafes and little shops. We went to the cathedral and found they have turned part of it into a museum. It looked interesting but we baulked at the €3 entry fee. Sucks being on a budget! The outside of the cathedral was really cool, there were loads of holes in the front wall which I think are from cannonballs coming over the fortifications. We’d probably know if we’d gone inside!

We went and hid from the heat in the shade outside a cafe and had an ice lolly, then Anna settled down with a tea while I rode round the town exploring a bit more.

We tried together to get into the castle, but the only accessible bit appeared to be a hotel, and we were running out of time so we bailed and went to the shops. Then it was back to camp for tasty dinner, a sip of Mario’s  delicious wine, and bed. Having just equalled our best ever distance we ned to beat it by 10 km tomorrow, so we want to be up at 5 am to avoid the dreaded sweaty afternoon riding. Goodnight!