I was worried that today was going to be the most boring day so far because I didn’t have far to go, but luckily the day had better things in store. I woke up to the pitter patter of rain falling on the tent. I thought I could wait it out, but it just kept coming. Eventually I started packing up. Putting away a wet 3-person tent by yourself when you can’t lay it on the gritty ground is really hard!

At 11:30am I was ready to hit the road. But where should I go? Without any wifi, I couldn’t look up a cycle route to the National Park. So I found the cycle path I’d arrived on yesterday to look for a sign towards somewhere useful. There was a signpost for Wolfhausen, which was vaguely the right way, so I took it.

It started off as a lovely cycle path along an old railway line. Then it went on a cycle path along a road, which was also fine. Then I got into the next town and the signposts disappeared. I checked the map and took a likely-looking path through the woods. It was difficult navigating, especially in the rain when I can’t get the tablet too wet. There was nobody around anywhere, which seemed weird for a Sunday. Even when I arrived in Wolfhausen, it was really quiet.

I hadn’t gone that far yet but it was 1pm and I was hungry. Of course, it’s Sunday again and on Sunday EVERYTHING is closed. Except cafes and restaurants. So I headed for a Greek restaurant and the waiter immediately brought be a shot of their home-made cherry liqueur, which was delicious and did wonders for my cough! A tasty lunch and hot chocolate later and had my route in Google maps and was ready to go back outside in the rain (ugh).

Once I got out of town, the route was along a ‘cycle path’ through the forest. At first it was a lovely little paved road and I tried not to think about how creepy the forest looked. It was used for forestry so it was all dark underneath, with the occasional cut-down trunk looking a little too much like a person squatting in amongst the trees. If it had been sunny, it would have been fine, but it was dark and the hood on my raincoat made it hard to hear properly or use my peripheral vision, so it was all the creepier.

Then my smooth little road turned into a gritty little track. And I came to a junction that wasn’t on the map. And the way that Google said I was supposed to go said ‘private, no entry’. There was clearly nobody around and I got the feeling that I shouldn’t be there at all, like it was only logging trucks that ever came down here. Then I heard a car coming and saw that it was a camo-painted Landover. Who owns a camo-painted Landrover?! Definitely only serial killers. I wanted to hide somewhere when it drove past but I didn’t have time and only saw the passenger staring unsmilingly at me out the window and they turned off just ahead of me. I’m in a horror film.

I took the track that lead back to the road and tried not to get taken out by the trip-wires that the serial killers had undoubtedly left out for me. When I made it to the road, I felt so much better! A little bit of space between the trees let the light in from above over the wider road and I could hear a car coming. I happily rode along, making sure my back light was on and in position.

At the end of the road, I had to join a bigger road and pulled over to sort out my luggage. With the tent wet, I’d had to split everything up differently and the way it was packed was pretty unwieldy. There are two bags on top of each other on the rack behind my saddle and they kept sliding off to the side, so I kept having to put them back. I was busy doing a full re-shuffle that involved removing the bags and wriggling them around when a lady wound down her window to ask if I needed any help. “No, it’s all fine, but thanks for asking!” And I felt the warm glow you get when strangers help each other out for no reason other than kindness.

After just five minutes on the busier road, I had to head back onto a cycle track. This one was in really bad condition and an ominous sign read ‘cycling at your own risk’. I had to watch the ground so closely to avoid bumps and dips that I couldn’t really look around, so I could just feel the darkness of the forest around me and imagine the creepy things that were lurking there. And it was still pissing it down. Please no flat tyres here, please!

Eventually I met up with a proper road again and took it through a town, where I started to feel a lot better. There were some people around and even a shop that was open – and it was a camping shop! I took the opportunity to get a new can of camping gas before heading down a 4km-long dead end road to find the campsite.

There was one more cycle path to take before I arrived, and it was a good one! Whilst the road went gently downhill, I was led into the woods again, up a gentle incline, along the flat for a bit, then I saw a warning sign saying ‘cyclists dismount’. I peered out over the abyss that stood before me – an absolutely insane descent! My breaks were worse for wear on account of the constant rain and there was no way I was getting down it on the bike without incident. At the bottom on the hill, there was a 90-degree turn and the path was covered in wet leaves! I also couldn’t get off my bike and walk next to it, because I wouldn’t be able to control the unwieldy weight effectively from the side. So I stood straddling my bike with the brakes pulled full on and skidded cautiously down the hill at a snail’s pace. When I was almost at the bottom, I got back on in an attempt to gather some speed before the impending up-hill, but I hadn’t seen the huge rut in the track after the corner! Donk, donk! My unhappy wheels clattered down it and my back wheel skidded out on the gravel as I started to crunch my way uphill again.  Man, touring is hard work! 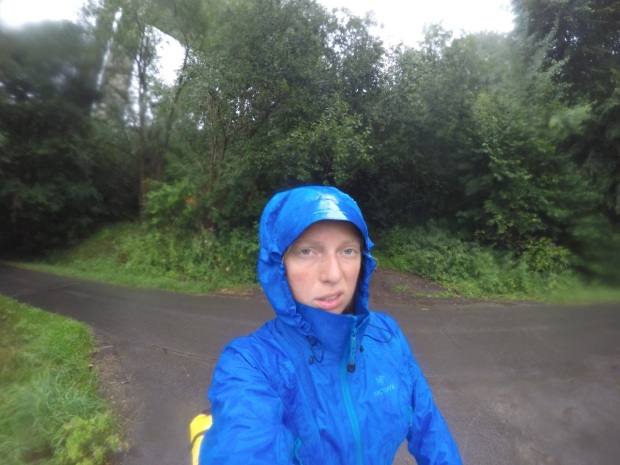 When’s it going to stop raining?

Then, after the next corner, finally, there was the campsite! Somehow it’s 6pm by now, so I set up my tent, do my chores and head to the pub for a hard-earned pint. And perhaps a schnitzel.