We were packing up our stuff this morning when Olaf arrived to see us off. It was great to see him before we went, we had been sorry to miss him and Iris at the shooting club parade yesterday. By the time he came to see us he’d already moved his flock of sheep from one Christmas tree plantation to another, but was now ready to enjoy his Sunday. We said thanks very much for looking after us and he said it was a pleasure for him, which was nice to hear! Everyone was really cool at Rothaargebirge; it was amazing how everyone moved their time around for us. Coralie and Olaf made time for us even though they were busy, and Olaf sorted us out with a sweet campsite. Christoph, who owns the field we camped in, and charged us €10 for three nights, let us use his own shower and washing machine. Jakob and Sophie spent time showing us around, searched for wild bison with us and gave us their own perspective on the project, hunting and life in the area. We could have stayed a lot longer!

We set off downhill into a chilly morning breeze and headed towards Geißen, around 78 km away. The downhill didn’t last long and we soon found ourselves slogging up a four-kilometre climb. We mostly went downhill today but with a few little ascents to make it interesting. Because we were following Google Maps we also found ourselves on some interesting little tracks, luckily they were still ride-able, but we’re starting to think there should be different direction options for mountain bikes and road bikes! 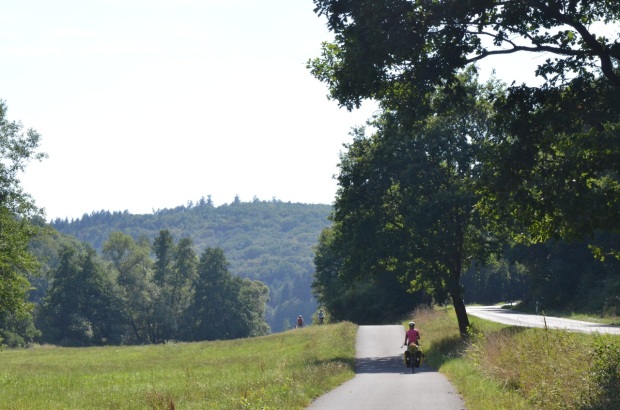 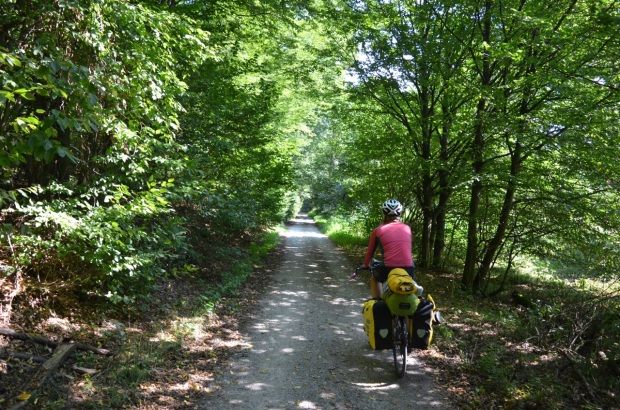 We finally rolled into the campsite just outside Geißen, booked in and set up camp. When we went to visit the toilets we found they were about 700 m from our tent. While there we checked out the showers and found they were token operated. So, another 700 m back to the office to enquire. “Oh yes, the showers need a token but you need to get them from the restaurant (another 200 m in the other direction). It’s all on the paper we gave you.” The paper was a sheet of densely printed A4, which we hadn’t really looked at. Anna got subdued British rage at this point. It was lucky we had the bikes to transit between all the different areas. It was like a city campus at a university. There was no wifi. It was a pretty rubbish campsite. We made the most of it though and had a nice chilled out evening with a never to be repeated dinner experiment of Spätzli (German egg pasta) with tinned vegetarian chilli. Mmmmm.