Today we had to ride 10km into Gießen then stop there to go the shops for food and try to find an eye doctor. Since we went swimming in the sea in Holland (3 weeks ago?), my eyes were itchy for a while, then the right one was sore and never felt better. I was worried there might be something stuck in it and wanted to get it looked at.

After shopping and using McDonald’s internet to load up the day’s directions, I found an eye clinic on the map just 1km away. But when I went in and asked if I could see a doctor, the guy told me that was a university building! He sent me in the direction of likely clinics and off we went. The first clinic I tried said that since my eyes weren’t swollen or gooey, it wasn’t an emergency. “I can book you an appointment. The next available one is in the new year.” What?! By then I’ll either be blind or better and I’ll definitely be in the UK. I asked in the optician but he said they can’t look into your eyes, perhaps I should try another clinic and make it sound more urgent and push for an emergency appointment? Hmm, good advice!

So I went to a second clinic and said I was worried there was something in my eye, can I please see the eye doctor! She said yes of course, can I see your ID? Being a foreigner, I would have to pay privately. It turned out to be only 25 euros though so I was up for it! How long will I have to wait? Oh, about… 5 minutes. Awesome!

That means that after finding out how the system works, I managed to see an eye doctor within 10 minutes of asking to see one, for only 24 euros. Bloody amazing. She looked in my eyes, told me I had an infection and gave me a prescription for some antibiotic eye drops and I was on my way.

A trip to the neighbouring pharmacy then we were on the road again, happy that I was going to continue to have depth perception. By this time it was almost midday and we were going to have to stop for food before we’d really gone anywhere, but at least we rode out of town a bit.

After a pit-stop, we’d probably done about 20km in total and it was the afternoon. We’d better get cracking! But there were a few things slowing us down. One was the wind! It had been in our faces since we left Rothaargebirge and it was still blowing fiercly. The other thing was that we were following a Google maps route, and it was all over the place! It started off not too bad, just a few nice tracks through field and forest. Definitely a longer route than taking the road, but quieter too. Then things started to get dodgy. One track turned into a narrow trail with the odd large stone to swerve around – not easy with a heavy load. Then we were on sandy forestry tracks in the creepy middle-of-nowhere. Then it told us to turn off into the trees. No path at all! Just trees. And it was starting to rain. So we switched to Maps.me for a bit to find a way back to proper little roads.

I directed us over the motorway, around a golf course and through a village to meet the B455. In the rain. We joined it but then pulled over after 200 meters. It was so busy! There was no shoulder and nobody slowed down to pass us, not even the trucks. Dave was eyeing up a farm track opposite and I tried to map an alternative route. There wasn’t anything good though, so farm track it was. The gravel track turned into a grass track and we were riding between fields in the wind and rain, hoping we’d meet up with a path soon! Luckily we came out onto a track and some dog walkers looked at us like “where did you two come from?”. Good question. 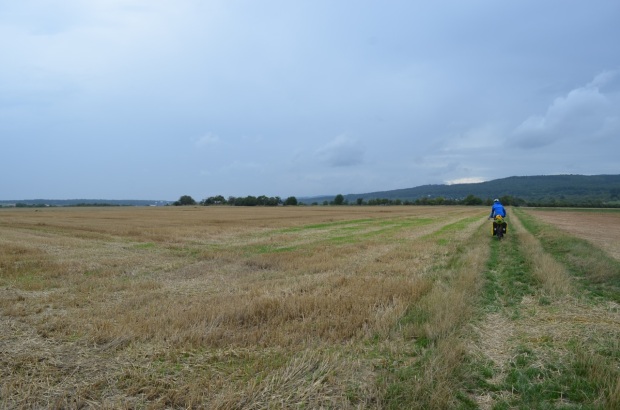 On the paved tracks we made it to the outskirts of a village for second lunch on a bench under a lovely tree with dense rain-stopping foliage. We were aiming for City-Camp Frankfurt, just north of the city, and it was still a little way away. But we got back on the bikes to re-find our lost Google route and make it there. Thankfully the route redeemed itself in the latter stages and we found ourselves on a gorgeous riverside cycle route as the rain started getting heavier. With no more route finding to do before the campsite, we enjoyed the ride. We even found an abandoned airstrip to play in on the way! 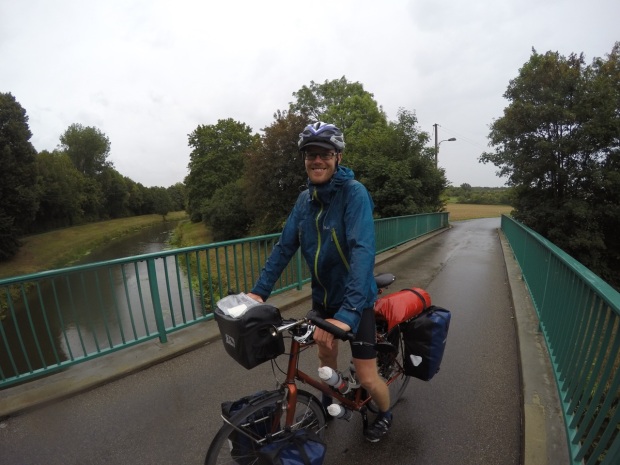 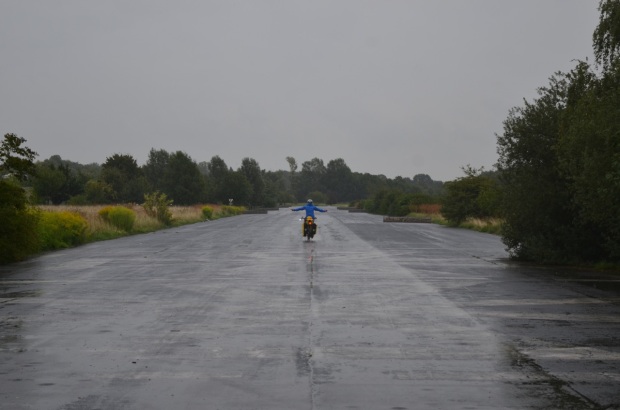 And at 6pm we finally arrived dripping at the campsite, got set up in the rain and went for warm showers. It was a pretty crappy campsite but we’ve learned not to expect much from city campsites. We did meet another tourer there, who was training for a spring charity ride to the northern most point in Norway!

The rain stopped in time for us to hang out the laundry, and we snuggled up in bed as the overcast sky went from grey to black, hoping tomorrow would be nicer.