After parting ways with Mark and Chelsea, the two of us stayed at the beach-side campsite another few nights to sort our things out, unwind and make a plan.  Our next stop is going to be in southern Portugal where family friends Jacquie and Neal have just bought a beautiful plot of land and have interesting plans for it.  But we took our time getting there and enjoyed some sightseeing on the way.

Our first stop was the last town in Spain before the border.  We organised a night of air bnb in Tui and turned up around 4pm in the hot sunshine.  Our room was in a lovely house in the suburbs – gardens and vegetable patches around each house and a river trickling between the rows of buildings.  Tui was very pretty and we enjoyed strolling around in the hot sun, stopping on a quiet street for the occasional beer and browsing the markets with the crowds.

Stolling in the market in Tui

The next day we headed for a campsite by the river Douro and met a Quebecois cycle tourist called Erik who was keen for some company.  He’d been riding around Portugal alone for 6 weeks and had hardly met anyone!  So we shared food and beer and stories on plastic chairs by the river and had a thoroughly enjoyable evening.

Hanging out with Erik and the bike he got when he was 19!

That part of Portugal appeared to be almost nothing but eucalyptus plantation.  The stuff grows very quickly in this climate and can be harvested every 8 years, so it’s all over the place.  And for at least two days, we saw pretty much nothing else!  So we were excited to do a boardwalk in the region called Passadicos do Paiva that had been recommended to us.  Even as we drove towards it, the eucalyptus monoculture continued, only giving way where it had been recently felled.  In fact, the car park for the walk was in a eucalyptus plantation!  This place must really be a wildlife island in a sea of barren forestry.

We got to the start of the walk by the lovely river and started to see a few patches of deciduous woodland.  Then we climbed up the wooden boardwalk steps past cork oak trees and gorse bushes, the land apparently regenerating after having been abandoned.  There were areas where you could make out old terraces with stone walls, so the land here was probably farmed in recent times and now it is starting to rewild itself in the absence of human activity.  All around the valley, the edges of plantations are visible, and there are even a few eucalyptus trees in the valley, but happily it seems to have escaped the worst of civilisation.  We had a lovely walk and stopped in the shade by the river at the far end for lunch before heading all the way back. 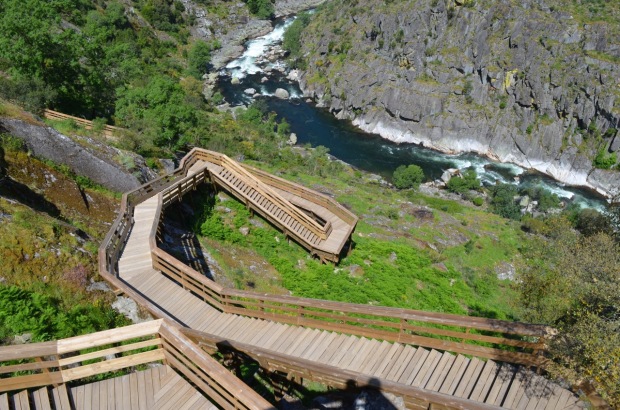 The boardwalk at Passadicos do Paiva 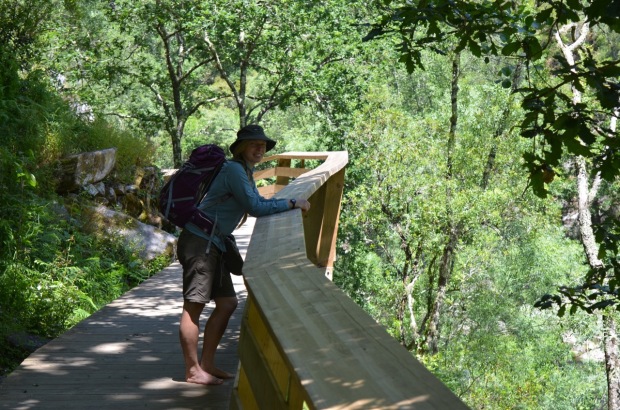 Enjoying a break in the shade

We continued south and eucalyptus gave way to agricultural land and sprawling villages.  The next stop on the way south was the medieval walled town of Obidos, recommended by Jacquie.  We found a lovely campsite nearby and drove into the town after lunch.  Obidos is a fabulous place – a gorgeous old town with a wonderfully restored wall that you can walk all the way around, pretending you’re looking out for attacking armies!  We spent all afternoon wandering around, enjoying the sights and having a drink in a courtyard under the shade of a lemon tree.  Sometimes it’s great to be a tourist! 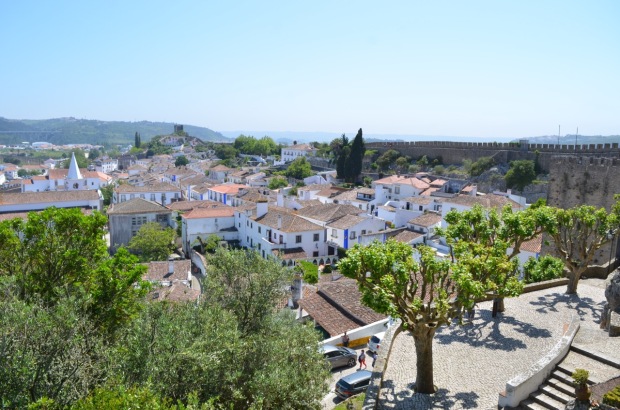 The town of Obidos

Today was our last day before we head to Jacquie and Neal’s tomorrow.  We passed Lisbon and enjoyed a change of scenery from farmland to cork oak forest.  The oaks have their outer layer of bark harvested from the trunk every 8 years for cork, but they still look grand and gnarly.  And between the trees the sandy soil is covered with grasses and wildflowers, buzzing with insects and singing with birds.  I think it’s the most beautiful industrial landscape I’ve ever seen.  Drink more wine!

We stopped off in a lovely little village for lunch where a crowd of people were having a BBQ.  It was a Dutch family who moved there 30 years ago and their Portuguese neighbours who welcomed us with beer and food, which was delightful.

Tomorrow we will arrive with Jacquie and Neal to share stories and knowledge and lend a helping hand.  I’m looking forward to it!