We arrived in Alentejo in Southern Portugal to a landscape of huge grass pastures liberally sprinkled with cork oaks and wild flowers lighting up the journey with waves of colour. The sky was a rich blue and the temperature went past 30°C and kept on going. We were trying not to turn the air con on – our car is already an environmental disaster zone – but we couldn’t help ourselves, it was roasting!

We were in Alentejo visiting Jacquie and Neal who are friends of Anna’s parents. Eight years ago they created a project to protect nesting loggerhead turtles from hunters on the island of Sal in Cape Verde. After almost a decade of battling hunters, disinterested  Government officials and hostile residents, SOS Tartarugas lives on, but Jacquie and Neal have decided they need a break so have come to live the good life in Portugal. Sounds like a plan to us!

We arrived at the end of a very long and bumpy track to be greeted by Jacquie, Neal and four excited dogs, Pluto, Kuka, Monty and Mama. They are all dogs rescued from the streets, or hellish Midnight Express style dog pounds on Sal. They have gone from emaciated and terrified to well fed, energetic and boisterous – these dogs have won the lottery of life! 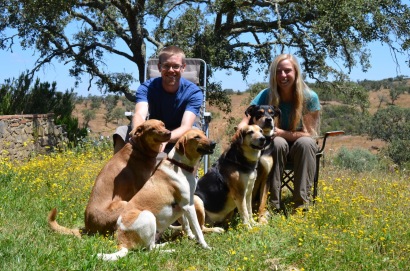 The property the guys have bought is big – 7 hectares of meadows and woodland, with two olive groves, an orchard and a big veg garden thrown in. There is a beautiful slow river with deep clear pools  running round three sides of the land. A couple of chickens were also part of the deal, more on those later! The lady who had the property before hadn’t done much to manage it over the last few years, so things have gone to seed a bit. We planned to help Jacquie and Neal get back on track! 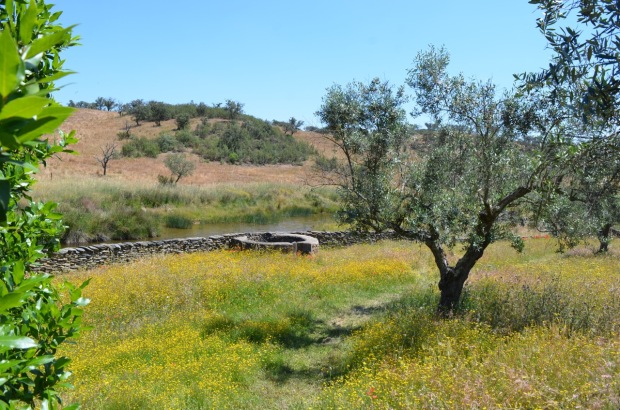 Our main job was to re-locate the chicken range. Chickens weren’t envisaged in the plan, but the vendor insisted they either stayed at the property or be summarily executed, so the guys gave in and inherited them. The old run covered one of the best views from the house so we helped move it. This turned out to be quite a lot of work, removing rolls and rolls of rusty old wire, pulling out concreted fence posts and relocating everything, all the while keeping one eye on the chooks and the other on the dogs in case they got any ideas. Eventually we finished and were very proud of ourselves until we came out one lunchtime to find the rooster had hopped over the fence we’d just built and was hanging out in his favourite old haunt. It took quite a while to get him back through the gate, which was annoying having just found out he could hop the fence with ease! Having said that, the new vista looked good! 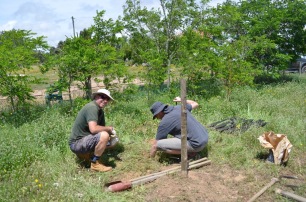 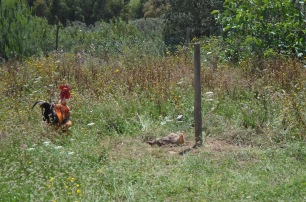 One of the cool things about the property is that there is a borehole (free water) which, apart from supplying the house, supplies a drip-irrigation ring going to the orchard and the veg garden. This means that trees and plants all over the property can be watered just by turning on one tap, and the drip system also saves a lot of water – Neal said a neighbour had recently installed a drip system and gone from using 10,000 L per day to 2,000 L – an 80% reduction! The problem was that everything was covered in waist high grass and we didn’t know how the system was laid out, or really whether it still worked. There were lots of bits of loose hose lying around – was a working irrigation ring just a pipe dream? The solution as it so often is, was a strimmer . After a day of petrol powered destruction I was able to dig out the whole orchard irrigation system. Once we’d found the main (satisfyingly large) tap we turned it on to the exciting sound of high pressure water rushing through the pipes. As we watched the orchard we started seeing jets of water spurting up all over the place – more of a large scale ornamental fountain than a drip system, but it works and with a few tweaks Neal will be able to water the orchard from his sun-lounger!

One hot afternoon we went to visit a family who are just starting out on their sustainable living dream. Mica and Sandra and their two kids have bought four hectares of land at the end of another very long track! The land is on a big slope so they had to get a bulldozer in to chew into the rock and create a plateau. On this they have built a small wooden cabin with outdoor toilet, shower and kitchen. Mica is now busy building a garden to feed them all. He said the plateau has actually come in handy. It is made of the rock fragments that the bulldozer chewed out of the hillside and is actually quite easy to dig. It is very infertile of course, so when he wants to plant something he digs a hole, fills it with topsoil from the bottom of the valley, then plants into that. Seems to be working so far, everything is coming up vigorously! We would love to come back and see how things are looking in five years’ time! 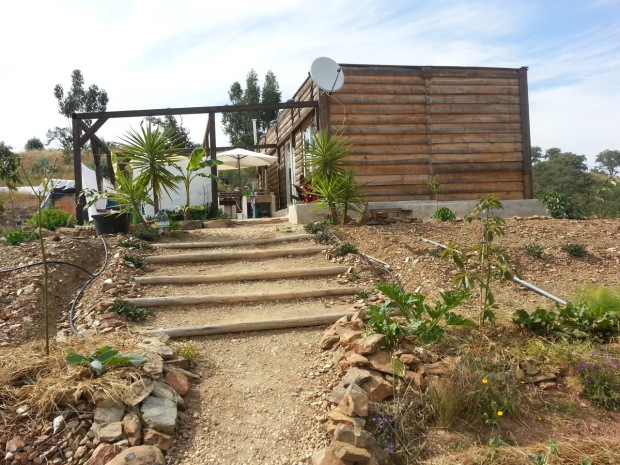 We were with Jacquie and Neal for just under two weeks. It was an amazing time, characterised by work in the morning, long lunches, then afternoons spent chilling in the shade, going for a walk or a dip in the river. It was so hot when the sun was out – the first beer of the evening always went down a treat! The river around the property was a massive benefit. There was loads of wildlife to be spotted or speculated about. We saw mallard eggs and turtles as well as otter scat – an exciting prospect for Jacquie and Neal! A river has definitely been added to our wish list, which keeps getting bigger and bigger! 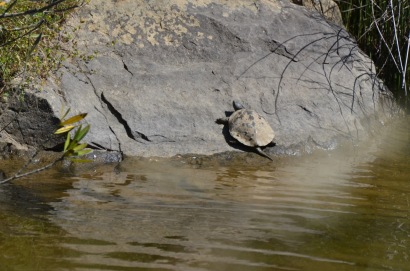 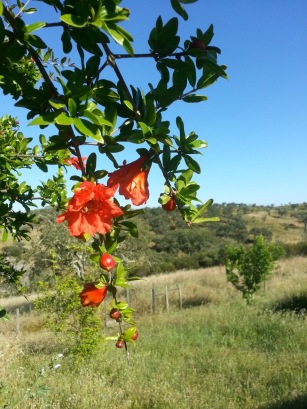 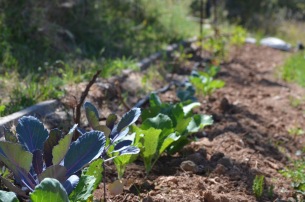 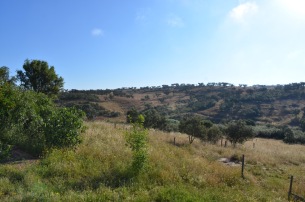 One clear night Neal set up the telescope out and we spent a fascinating couple of hours stargazing. First we focused on Jupiter, which was high in the sky, affording a good view relatively unobstructed by atmospheric interference. Once we’d found our planet we sharpened up the focus to see a small orb featuring a shaded stripe through the middle – the famous colour bands across the gaseous surface. We could also see three of Jupiter’s moons orbiting their planet as they have for billions of years. This view, first scientifically recorded by Galileo, allowed him to prove that celestial objects orbited things other than Earth, and was the first real scientific challenge to the theory that Earth was at the centre of the Universe.

After Jupiter we moved on to Saturn. Neal set up the focus and I looked through the eyepiece to see a bright white planet with an extremely distinct white band around it – the rings of Saturn just sitting there right in front of my face! I’ve never actually seen them before and it was a really awesome. I guess I always assumed they were there since I learned about them as a child, and I’ve seen plenty of satellite pictures and artists impressions, but I never imagined what they would look like from here. A weird, wonderful and VERY FAR AWAY neighbour! Thanks Neal for re-awakening our awareness of the Universe! 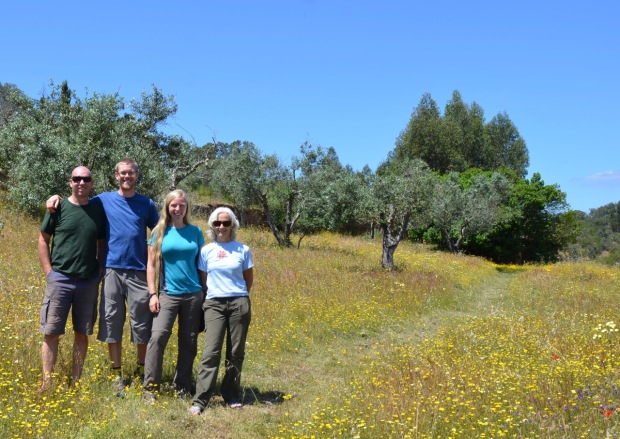 It seems like the guys have landed in their paradise, but we are still on the hunt for ours. After two wonderful weeks it was time to hit to road again and head North, back to the Picos de Europa. We had a little stop to make on the way though…